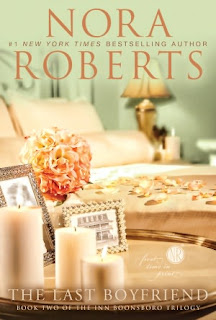 The Last Boyfriend begins shortly after the previous book in Nora Roberts’s Inn BoonsBoro trilogy ended. Owen Montgomery, along with his brothers, mother, and aunt, are adding the finishing touches on the complete renovation of Inn BoonsBoro and getting it ready for the grand opening. Owen is the coordinator/organizer of the family’s construction business and keeps track of all the details. He’s always focused and composed, but when he shares a quick, heated encounter with Avery MacTavish, Owen gets flustered and begins to see his long-time friend in a different light.

Avery owns and runs Vesta Pizzeria which is located diagonally across the street from Inn BoonsBoro. She has watched her friends bring the inn back to life and witnessed her dear friend, Clare, find love again with the youngest brother. While helping them, Avery shares a kiss with Owen, whom she has known forever and just happens to be the first boy she ever loved. (Granted, she was five and he was eight, but he did buy her a plastic ring from a bubblegum machine.) The kiss leaves Avery and Owen wondering if they should continue down the path of this new relationship or if they should just remain friends.

I really enjoyed The Last Boyfriend and it is in large part to its wonderful hero. I just loved Owen! He is anal retentive, a neat freak, and an obsessive list maker (squee!). On top of that, he is as loyal as the day is long and a total gentleman. It’s no wonder Avery had a thing for him! I like that they took their relationship slow and that he was patient with her when she had some serious issues to work through. I loved Avery as a secondary character (as Clare's sassy best friend) in the first book, but it took a bit for me to warm up to her as a heroine. She did a couple things that frustrated me, but she ultimately earned Owen's heart. And they shared a very sweet and sigh-worthy scene at the end. *g*

Some readers may have a problem with Nora Roberts’s talk of construction, interior design, and such. I did not. It not only gave me a clear vision of the appearance of the inn, but I view it as a testament of how much she loves the actual inn this fictional one is based on. In the books, the inn is the central point of the stories and is almost as much of a character as the heroes and heroines themselves. And when they all finally experienced the grand opening in this story, every character’s excitement was completely contagious. J

The Last Boyfriend is a satisfying contemporary romance and a book I recommend. It is the second in the trilogy and stands completely on its own, though I believe reading The Next Always first would definitely enhance your enjoyment. It is great addition to the series and has me on pins and needles for the last book, The Perfect Hope, which releases in November.