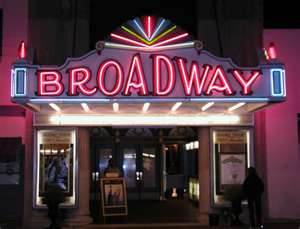 I've enjoyed Tony Award winning musicals in legendary Broadway theaters and been captivated by spectacular operas performed in ancient Roman amphitheaters but I can't remember when I've been as completely entertained as I was the other night at my grandniece's kindergarten - 4th grade production of The Wizard of Oz.  I had no idea what to expect when we arrived.  Actually, none of us did.  The kids had been attending top-secret rehearsals for the past six months but all we knew besides the title of the play was what character my grandniece would be playing (a Munchkin) and what her costume looked like.  Beyond that, it was all going to be a surprise.

The production was going to be performed at the high school auditorium and judging from the size of the crowd waiting for the doors to be opened it was going to be a sell-out.  It was clear from the scenery on stage that a great deal of thought and work had gone into this production and we all waited with anticipation as the two narrators (fourth grade boys) stepped onto stage.  And then the fun began...

The microphones wouldn't work.  (A teacher ran down the aisle from the back of the auditorium to swap the non-working mics for new ones then ran back up the aisle to the sound/light room.)  The show continued...for about two minutes.  Then the new microphones started cutting in and out.  Back came the teacher, running down the aisle to the stage again.  After the second microphone swap, we finally heard the narrators.  Sort of.

Next on stage came Dorothy.  At least it looked like Dorothy.  It was kind of hard to tell with no lights.  Glitch #2:  no spotlight.  This time there was no teacher running down the aisle.  Instead, there was a voice rising from the darkness assuring us "there will be light."  Soon! 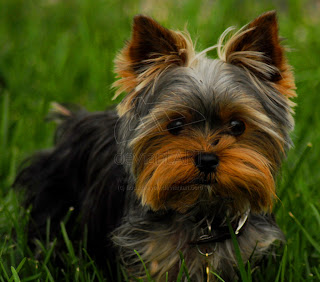 With the spotlight restored, the play was off and running.  Well, except for that little glitch when the curtain caught on Dorothy's house and pulled it over.  Who needs tornadoes?  Dorothy, bless her heart, was a pro through it all.  Obviously, she had been well rehearsed and wasn't going to let anything get in the way of delivering her lines.  You know, things like the mic going out again, or the curtain getting stuck or Toto running circles around her legs (yes, Toto was a live Yorkie on a leash) or pulling Dorothy all over the stage as he tried to get to his owner in the wings.

All things considered, the action was moving along pretty smoothly at this point.  True, the mics were still going in and out but the lighting seemed to have been conquered and we were on our way to Oz with newly acquired friends Scarecrow, Tin Man and Cowardly Lion.  Sure, Tin Man had a minor meltdown when he forgot his lines but came back with gusto after a five minute time out behind closed curtains, Scarecrow exhibited a sharp wit and I'm firmly convinced the Lion is destined for a career on Broadway.  Then the curtain got stuck...again...and the little flowers refused to leave stage (they were mesmerized by the people from the Emerald City)...and Toto staged a sit-in center stage and refused to move...and Scarecrow forgot that he was now using a hand-held microphone and, therefore, we couldn't hear anything he was singing when he flung his arms out wide.  Scarecrow, it turns out, is a very enthusiastic singer!

During intermission, the audience was encouraged to partake of hot dogs in the hallways while the teachers frantically tried to fix the glitches.  Two minutes into the second half brought home the reality that not only were the glitches not fixed but new ones had surfaced and the more things went wrong, the funnier they got.  By now, not only the audience members were laughing but so were the actors.  (My six-year-old grandniece who was finished with her part and now sitting on her dad's lap kept asking why people were laughing because "it's not supposed to be funny!")  Of course, that only made things funnier! 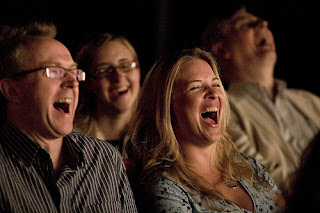 By the time the four main characters reached OZ, they were all sharing the only (somewhat) working microphone, passing it back and forth and trying to remember who had the next line and, therefore, got the mic next.  Let's just say the mic didn't always get handed to the correct person.  Then the mic stopped working again and all four characters turned around simultaneously, hands on hips and glared - actually glared - at the teachers in the sound booth! The audience dissolved into laughter again and this time Scarecrow uttered the best line of the whole night, saying "We oughta just turn this into a comedy"... just as his microphone started working again.  Needless to say, the audience roared and Scarecrow - with a silly grin - accepted his due for the brilliance of his ad lib.

Once the play ended and the cast took a well earned curtain call, my grandniece's mom leaned over and said to me, "I wasn't planning to buy the video but there's no way I'm not getting one now.  I haven't laughed this hard in years!"  Judging by the smiles and chuckles filtering through the audience as we exited the auditorium,  I have a feeling the school probably set a record for number of videos sold.  It was an imperfect production - cluttered with glitches and mishaps, forgotten lyrics, off-key singing and stubborn dogs - performed by a group of fresh-faced, enthusiastic students who put their hearts and souls into each word spoken and every lyric sung...whether they hit the notes or not.  In other words, it was an imperfect production that was perfectly wonderful.

Email ThisBlogThis!Share to TwitterShare to FacebookShare to Pinterest
Labels: PJ