Review - - The Taming of a Scottish Princess 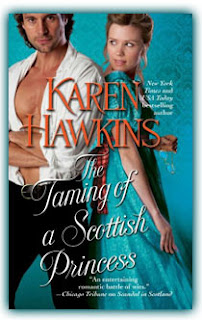 The Taming of a Scottish Princess
By Karen Hawkins
Publisher:  Pocket
Release Date:  May 22, 2012

For the past four years, noted Egyptologist Michael Hurst has relied upon Miss Jane Smythe-Haughton for organizing every aspect of his life from his household staff to trips abroad to the crispness of his morning bacon.  Michael can recite every characteristic that makes Jane the perfect assistant for an explorer such as himself but would be hard-pressed to note any that make her an attractive woman - until one night in a crowded London ballroom when his eyes are unexpectedly opened to the fact that other men find Jane appealing for more than her organizational skills; a fact he finds baffling, to say the least.  But the seed has been planted and, gradually, begins to grow.

Why haven't I noticed her eyes before now?  I've seen them hundreds - no, thousands - of times and yet I've never really paid attention to the color.


Jane Smythe-Haughton left her true heritage - and her real name - behind at the age of sixteen, determined to travel the world.  Now, fourteen years later, she's headed back to the last place she wants to go when her employer's search for the missing Hurst Amulet takes them to an island off the coast of Scotland.  Jane is certain she can help Michael find the amulet without being recognized or giving away any of her deeply held secrets but conditions on the island aren't what she expects...

Surely no one from Barra will recognize me.  That would undo all that I tried to accomplish...if it hasn't already been ruined.  "Jaimie, you fool," she muttered.  "What did your father talk you into this time?  You promised to hold firm.  You promised!"

...and she's forgotten just how determined Michael can be when presented with a challenge.

Perhaps here, on this windswept isle, he'd discover the answers to the two greatest mysteries of his life:  the location of the elusive Hurst Amulet and the true history of the long-dead princess of Barra.  It wouldn't be for lack of trying.

Suddenly, he's staring into her eyes, leaving her breathless with kisses and treating her like a woman.  Is it any wonder her heart is dancing with delight?  But will that keen mind of hers follow suit or hightail it in the direction of her hard won independence when things get serious?

I've enjoyed all the books in this series but, in this reader's opinion, Hawkins saved the best for last.  Fast paced adventure, genuine emotion, a satisfying conclusion to the mystery that's been at the center of the series, plenty of humor and some of the best banter between a hero and heroine that I've read in awhile all combine to make The Taming of a Scottish Princess a winner.

Michael Hurst is one of my favorite types of hero:  the dedicated scientist/explorer who can sniff out antiquities better than anyone but doesn't recognize the female treasure by his side until he's jolted into awareness.  He doesn't tumble easily - or happily - but what would you expect from a dedicated, demanding and, yes, grumpy scholar?  But when the blinders come off?  Katy, bar the door because when that renowned laser focus turns to Jane, all bets are off and when he finally, finally comes to terms with his fate?  Well, that's just too delicious for words.

I can't abide a whiny, woe-is-me heroine who expects the hero to rush in and rescue her from the obstacles life has thrown in her path.  Give me a heroine who pulls herself up by her garters, makes a plan and takes charge of her future and I'll be cheering her all the way to her happy-ever-after finish line.  Give her intelligence, compassion and a hint of vulnerability and that only makes me cheer more.  Jane is just such a heroine and it was pure pleasure going along on her journey.

Hawkins ties up several loose ends in this finale without littering the book with a plethora of characters from previous books.  I was delighted to receive updates on issues facing some of the Hurst siblings (one is an especially happy update!) but am pleased that the focus of this book remains exactly where it should be; on Michael and Jane.  The terrific secondary characters that do surround Michael and Jane are integral to the story rather than simply window dressing.

While this is the final book in a series, Hawkins has written it in such a way that it can be enjoyed as a stand-alone.  However, it won't surprise me one bit if, after reading it, you'll be off to discover the joys of the rest of the books in this series.  The Taming of a Scottish Princess is a singular delight.  I highly recommend it!

Posted by The Romance Dish at 8:30 AM