Review - - Sound of the Heart 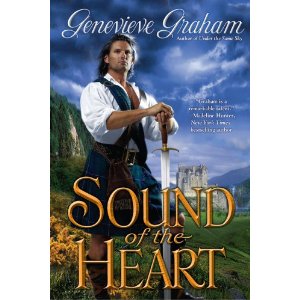 Sound of the Heart
By Genevieve Graham
Publisher:  Berkley Sensation
Release Date:  May 1, 2012

The Highlands of Scotland and Colonial America are two of my favorite settings for historical romance.  Genevieve Graham combines the two in a sweeping saga that takes the reader on a breathtaking, and often heartbreaking, journey from the battlefield of Culloden to the wilds of Colonial America.

For a man like Dougal MacDonnell, the Battle of Culloden is a nightmare.   Faced with the loss of his family and friends at the hands of English soldiers, Dougal experiences the added pain of being able to “hear” the thoughts of the dying men around him, including his own father.   Dougal has been able to hear other men’s thoughts his entire life but never in such a heartbreaking way.

When the fighting ends, Dougal is the only member of his family left to endure the brutal torture of English imprisonment.  Hope appears in the form of a fellow prisoner, a young lad who helps Dougal escape and, together, they make their way back to Scotland.  For two years, they live in an abandoned cottage and work the land, slowly returning to a somewhat normal life but always watching over their shoulders.  It is during this time that Dougal discovers Glenna, a young woman with a most unusual background who captures his heart deeply and completely.  Their happy ending is within sight but, unfortunately, the English are not quite finished with them.  (This was a time in history when England was determined to erase the people and traditions of Scotland from existence or at least from the British Isles.)  Captured, Dougal is once again imprisoned while Glenna is destined for a life of indentured servitude in America.  Only by agreeing to serve the hated English in a military regiment comprised of Highland warriors does Dougal have any hope of ever finding his beloved Glenna.  But America is a huge country and he has only the strength of his love to guide him.  Will he ever again hold her close and hear the sound of her heart?

I enjoyed this book very much.  It’s filled with fascinating bits of history, without making me feel like I’m in a history lecture, and the kind of sweeping, epic love story that keeps me reading into the wee hours of the morning.  Her vibrant voice, richly emotional story and fast paced story kept my attention from the first page to the final word.  Graham has created a hero and heroine that I liked and admired from start to finish and their actions throughout their joint, and separate, journeys only reinforced those feelings.

This book is true to the times in which it is set and those were not easy times.  Therefore, there are some scenes that are hard to read, especially some that involve Glenna’s life after arriving in America.  Sure, the author could have glossed over the more unappealing aspects of the life servants and prisoners were forced to endure back then but I, for one, am glad she remained true to her characters and the conditions in which they were forced to live.  It may break my heart and make me uneasy at times but, by giving us the entire picture, she gives us the entire person.  Not a surface shot but the richly layered, complex individual; forged by both the good and  bad events in their lives.

I'll look forward to reading more by this talented author!

Thanks for answering a few questions for me, Genevieve!

I've long been a fan of romances set in Colonial America but they're hard to come by these days.  You send your characters on a journey from the Highlands of Scotland to the American Southeast - two of my favorite places.  What led you to set SOUND OF THE HEART in this time and place?

I’m surprised at how difficult it is to find colonial romance. It was such a romantic (though violent) time to live! Imagine starting a whole new civilization? All the challenges and adventures?

And the Highlands? Well, there are a couple of reasons for that. One is because I’d been reading Highlander adventures and getting caught up in the vast Scottish world. The other is that I’m Scottish—well, third generation Scottish. I’m Canadian now, but all my roots are still firmly entrenched in Scotland.

Since my first book ended up in South Carolina, I loved the idea of someday the brothers maybe finding each other. Then I started researching and discovered some facts that aren’t so well known … did you know hundreds of thousands of Europeans were shipped to the colonies as slaves? I’m not talking about “indentured servants”, though there were thousands of those as well. These were actual slaves! I won’t go into all of that here, but the facts really surprised me and left me quite annoyed that it’s something very few people know about. To me that’s huge! Anyway, writing this story allowed me to shed a little light on the issue while incorporating the characters’ adventures and romance.

Your books are rich with history and you don't shy away from the gritty
details that were part of the reality of life in those times, especially Dougal's
experiences during and following Culloden and the life awaiting Glenna when
she lands in America.  What type of research did you do for this story?

When I started researching for my debut, “Under the Same Sky”, I was a newbie. I knew nothing about history and had no idea where to start on research. I brought home books by the pound then fell asleep because they were too dry for me. I combed the internet but came across so many conflicting sites it was boggling. So I tried something different. I went to the sites of re-enactors, people who spend their weekends reliving the past down to the smallest detail. They are passionate about being true to history, so when I asked what I thought was a simple question, like about the length of a sword, I’d receive a two page response. It was wonderful! Like looking for a square of chocolate and discovering an entire bar! For “Sound of the Heart” I was back at it with the Highlander re-enactors, and was even able to speak with some of my local 78th Highlanders (I live near Halifax). I also got to speak with Lawrence Clark from Bushcraft Ventures in Scotland! Lawrence is a survival expert, so he helped Dougal make it out alive after one traumatic event!

Reading SOUND OF THE HEART brought to mind many of the sweeping
historical sagas I've read over the years.  What authors do you read?  Are
there any in particular who inspired you to begin writing?

I’m a huge fan of Diana Gabaldon’s writing, and it was she who unwittingly inspired me to write. I read her series four times, then listened to the unabridged three more times. I read Sara Donati’s “Into the Wilderness” series, dove into the work of Penelope Williamson and Jennifer Roberson and Marsha Canham … then finally decided it was time to try and create my own adventures.

The end of SOUND OF THE HEART leaves open the possibility of future
stories.  Will we be revisiting these characters again?  I sure hope so!

I hope so too. I tend to write “companion” novels rather than sequels, though. We’ll see. I’ve written a third book, which Penguin is considering at the moment, called OUT OF THE SHADOWS. If you’ve read the first book, you’ll know who Maggie is. Well, this third book is about her quiet, scared sister, Adelaide, and it has my first non-Scottish hero. Jesse is kind of like an early cowboy, and I adore him. Then again, I love all my heroes!
Posted by pjpuppymom at 12:00 AM