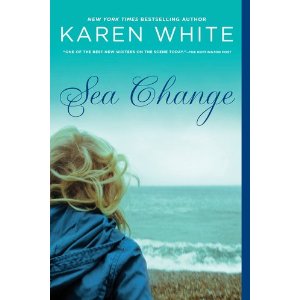 At thirty-five, Ava Whalen seems set to marry her family-approved fiancé and settle into a life similar to the lives of her parents and four much-older brothers, all of whom are married with children and homes near their parents in Antioch, Georgia. This predictable pattern is shattered when Ava, a midwife, meets Matthew Frazier, a psychologist, at a medical conference. The two fall in love at first sight and marry two months later. Gloria, Ava’s mother is not happy with the sudden marriage, but she is so dismayed by the couple’s plan to live in Matthew’s centuries-old family home on St. Simons Island (the largest of Georgia’s Golden Isles) that she retreats to her room, refusing even to tell her daughter goodbye.

Ava has her own concerns about living on the island. For as long as she can remember, she has had a fear of large bodies of water, particularly the ocean, which can cause paralyzing nightmares. As if her water phobia were not enough of a problem, she learns within a few hours of arriving at her new home that Matthew has neglected to tell her that he is a widower whose first wife, artist Adrienne McMahon, died in an automobile accident four years earlier. The following day Matthew reveals another shocker: Adrienne’s family believes he killed her. Ava assures Matthew of her trust, but Matthew clearly still has secrets he is protecting. When they are together, the power of the attraction between them silences Ava’s questions, but in his absence the questions haunt her.

Eager to escape questions that keep mounting, Ava accepts an invitation from Tish Ryan, a local florist and long-time friend of Matthew’s family, to join her research for the historical society. Ava is soon fascinated with a Frazier family legend about a ghost who haunts the island’s shores calling for the wife who reputedly left him to sail for England with her lover, a member of the Royal Marines stationed on St. Simons during the War of 1812. But Ava finds the past too is filled with unanswered questions. And when, at Matthew’s urging, she allows him to hypnotize her in order to learn answers to some troubling questions about her own past, Ava’s connection to those distant figures becomes frighteningly real.

Interwoven with Ava’s story are bits of the life of Pamela Frazier, the legendary faithless wife. The reader learns of her great love for her husband Geoffrey, her grief over the loss of a child, her dedication to midwifery, her difficulties with a jealous sister, and her death by drowning. The past impinges on the present in tangible and indefinable ways. A wedding band engraved with the word “Forever” is found serendipitously by Pamela in the 19th century and becomes a symbol of the commitment she and Geoffrey share. It is passed from generation to generation in the Frazier family and two hundred years later becomes the wedding ring Matthew gives to Adrienne, a ring she mysteriously rejects, insisting that it does not belong to her. A different time is merely another room into which characters and readers sometimes move.

Once again Karen White employs elements of the classic gothic romance to create an appropriately haunting story. But what sets White apart from other descendants of du Maurier and company is that while the conventional elements are included—the ancient house haunted by the past, the hero with a mysterious former wife, the secondary male who befriends the heroine and plants doubts in her mind, and so on—<i>Sea Change</i> is also something more complex and subtle than just an entertaining gothic tale.

As Ava leaves home to begin her new life, her grandmother tells her to always remember “that some endings are really beginnings.” This line is both a clue to Ava’s past and a thematic statement. These words evoked T. S. Eliot’s “East Coker” for me. The second of Eliot’s <i>Four Quartets</i> begins “In my beginning is my end” and ends with an inversion of the opening line, “In my end is my beginning.” In between, Eliot considers time and timelessness and an unending cycle of creation, destruction, creation. I don’t know if White is consciously alluding to Eliot’s poem, but in a very different context, she pushes the reader to examine Eliot’s theme.  That she does so while keeping her reader engaged with her characters in both the nineteenth and twenty-first centuries is a measure of her storytelling gift.

Early in the novel, Ava first sees Matthew’s ancestral home and thinks “it seemed as if the house were hiding from time itself, content to let the years bypass it unchanged, in the same way the breezes stirred the marsh grasses, leaving them to return upright again.” In the closing lines, her thoughts once again focus on the house: “Matthew took my hand in his, his fingers touching the ring like a talisman, then led me back toward the ancient house, the house with memories like an ocean’s waves with no beginnings and no endings, its sighs reminding me of how impossible it is sometimes to distinguish between the two.” Shades of Manderley—and echoes of something more profound.

Thanks to NAL Accent, we have a copy of SEA CHANGE to give to one randomly chosen person leaving a comment today.