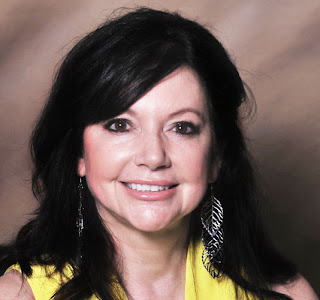 
Carey, along with Tessa, Courtney and Leigh released an anthology in May that is part of a breast cancer fundraiser.  Be sure to check out Three Weddings and a Murder.  Her single-title debut, First Do No Evil was released June 26. Find more information about Carey at her website (be sure to check out the "fun facts about moi") and connect with her at Facebook and Twitter.

Thank you so much to everyone at the Romance Dish for having me today! This is one of my favorite blogs, and I am delighted to be here.  I have a giveaway coming up, but first I want to talk about love, lightning and those wonderful places called coffee shops.

Let's start with lightning. You never know when it will strike. In one of my favorite movies of all time, MEET JOE BLACK, a father (played by Anthony Hopkins) has a heart to heart with his daughter (played by Claire Forlani) about her unexciting relationship with her boyfriend. He doesn't want her to settle, and he's very persuasive. 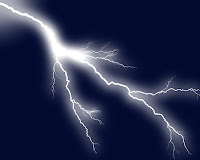 Now I've seen that movie about a million times, but I can tell you I never believed lightning could strike me. Those wonderful, bigger than life encounters don't happen to ordinary people. Or do they?

After my babies (Who are we kidding? These children are big dogs now!) left the nest, I finally started dating again. I'd been divorced a long time, and I was going through the motions of meeting new men with all the same enthusiasm I had formerly reserved for studying for my pathology exams in med school. Until one evening I arrived early for a first meet at…a coffee shop. Starbucks in Barnes & Noble to be specific.

I retreated to the ladies' room and after, as I was sneaking past the coffee area, feeling perfectly justified not waiting on a tardy man, I saw him. Tall, blond, built, and waiting for me. I veered into the coffee shop. Cautiously, I allowed him to buy me a bottled water and escort me to a tiny table with wobbly legs. Three and half hours later I walked out of ….the coffee shop, my own legs wobbly. Lightning had struck.

In FIRST DO NO EVIL the heroine, Skylar Novak, is going through the motions of living life until the day she meets a handsome detective outside…a coffee shop, and lightning strikes. Danny and Sky have a bigger than life moment, and that moment changes everything.

If you like, you can read their encounter by going here: http://www.careybaldwin.com/books/first-do-no-evil/ and clicking on Excerpt.

I'll paste the blurbs from FIRST DO NO EVIL and THREE WEDDINGS AND A MURDER below for those who are interested. 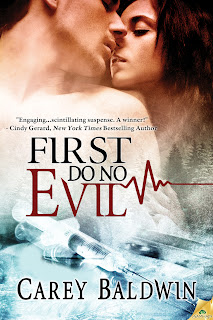 FIRST DO NO EVIL


There’s a killer lurking in Dr. Skylar Novak’s family tree: the gene for breast cancer. That’s why her brilliant brother invented the Bella vaccine. But even if the miracle drug protects her from the cancer that took her mother’s life, it can’t save Sky from the flesh and bone evil stalking her in secret.


When the killer strikes, detective Daniel Benson finds himself in the wrong place at the right time. The bold detective manages to save Sky’s life…just in time for her to return the favor. Survival leads to seduction, and Danny risks everything—his career, even his life, to keep Sky safe. But will the buried sins they uncover cost him her heart?


Danny’s strong arms may hold her close, but only Sky can stop the terror that’s coming next… 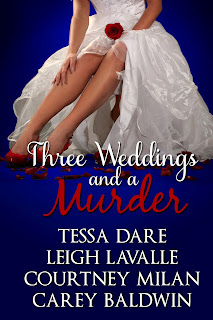 THREE WEDDINGS AND A MURDER

Four friends who care have each contributed their own story to bring you this very special anthology. You’ll enjoy three historical romances and one contemporary romantic thriller—four distinct voices united for one cause. All profits from the purchase of the anthology will be donated to the Avon Breast Cancer Walk. Funds will be used to support research to find a cure or prevention for breast cancer and for outreach programs with an emphasis on assisting low-income, elderly and minority individuals.


Now for the give away. I'm offering a $25 gift card and a digital copy of both FIRST DO NO EVIL and THREE WEDDINGS AND A MURDER to one commenter drawn at random. My question is this: Have you ever had lightning strike? Or do you have a favorite encounter from a book or movie where lightning strikes?

Thanks so much to the Romance Dish for having me, and to everyone who stopped by!
Posted by pjpuppymom at 12:30 AM