Review - - Bride of the High Country 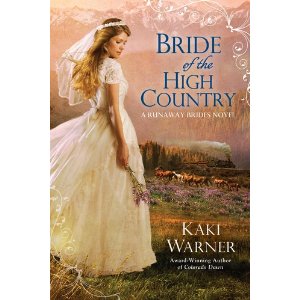 Arriving in America with her family at the age of ten, Cathleen Donovan looked forward to a wonderful new life but when they were betrayed by the Irishman who was to have been their guide, she was thrust into a living hell that no child should even know of let alone experience.  Two years later, the only surviving member of her family, Cathleen finally escaped her captors and, thanks to a kindly priest, was placed into the care of a wealthy New York matron.  Leaving her Irish heritage behind, she became Margaret Hamilton and with her guardian's guidance, was transformed into a respected and much sought New York City socialite but she's never forgotten those two years of hell and fear of discovery is her constant companion.

Confident that neither scandal mongers nor her former captors will be able to touch her once she's the wife of Irish railroad mogul, Doyle Kerrigan, Margaret looks forward to her impending wedding.  But, on the eve of the nuptials she begins to question whether she really knows the man she's about to marry and when she accidentally overhears a damning conversation on her wedding day she knows she will endure a life of misery if she stays with him.  With the encouragement of her guardian, she hides her wedding gown, takes a new name (Lucinda Hathaway) and escapes with the railroad shares Kerrigan has given her as a wedding gift, leaving her furious new husband to explain his missing bride to the hundreds of guests waiting to toast the happy couple.

Owing his life to Kerrigan, Tait Rylander has been his friend and business partner since the two met during the Civil War.  Together, they've built a business empire but Tait, a lawyer and southern gentleman, has come to realize that Doyle is a ruthless man prone to shady dealings and brutality of which Tait wants no part.  Compounding the strain between them is Margaret, a woman Tait secretly admires, respects and desires; a woman he would have courted himself had Doyle not made the first move.  Now Tait is on Margaret's (Lucinda's) trail, sent by Doyle to bring his errant bride, and the railroad shares, back to New York City.  He finds her without much trouble but, once he does, his loyalties begin to shift.

"I've said it before and I'll say it again.  I am not your enemy, Lucinda.  I never have been.  And I never will be."


He watched a great sadness come over her face and something close to tears glitter in her eyes.


Tait.  It was the first time she'd called him by his given name.  "I'm here to protect you."


"From whom?  Smythe?  you didn't even know about him until after you arrived.  Doyle?  If that's the case, you should have stayed to stop him, rather than coming after me.  Instead, you've trailed me like a hound on a blood scent.  Why would you do that"?


For you.  The unspoken thought exploded in his mind.

To begin with, Margaret and Doyle's marriage license was never signed nor filed and is in Lucinda's possession.  To put it simply, she's not married.  Then they discover that Tait is not the only person following her.  A dangerous man from her past is on her trail too and his purpose is deadly.  Tait appoints himself her protector, slowly becomes her friend and, finally, so much more.  But Doyle is becoming suspicious and Lucinda has a hard time trusting anyone, especially a man like Tait who sets her body on fire and stirs dangerous emotions in her heart.  The American West and long desired independence are within her grasp.  Will she she give up her dream for love?  Will Tait and Lucinda find a way to craft a new dream?  Or will Doyle and a powerful villain exact revenge and bring their happiness to an end before it has the opportunity to blossom?

Once again, Kaki Warner has captured my interest and my heart with a deeply emotional story about love, friendship, overcoming adversity and following your dream.  Up to this point, we've only known Lucinda as she is after arriving in Heartbreak Creek, Colorado (in the first two books of the trilogy) with her past a mysterious secret.  I have to admit that, of the four women who banded together and formed a tight friendship in those books, Lucinda was my least favorite.   That all changes with Bride of the High Country.  With her attention to detail, multi-layered characters and sweeping, frontier settings, Warner once again has created characters I care for, fear for and cheer for.  Tait and Lucinda are two people who deserve happiness and their journey, while fraught with danger and heartache, is also filled with humor, hope,  lasting friendship and enduring love.

Edwina, Maddie, Prudence, Lucinda and their families are wonderful characters.  As with the ladies themselves, the bonds I've formed with them are strong and lasting which is why the latest news from Kaki Warner has me jumping for joy.  Ms. Warner has signed a contract for three more books set in Heartbreak Creek, Colorado.  I can hardly wait!

The books in the Runaway Brides trilogy are Heartbreak Creek, Colorado Dawn and Bride of the High Country.  I highly recommend them all.