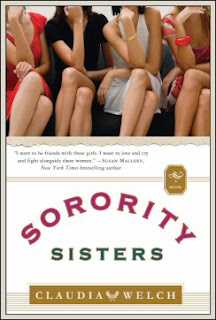 The year is 1975, and four young women meet as Beta Pi pledges at the University of Los Angeles.

Karen Mitchell is a long way from her home in Connecticut, but the influence of her mother who thinks a woman’s worth is measured by her appearance remains strong. She has learned that “there’s just no ignoring your mom,” and so she accepts her mother’s pronouncement that Karen’s looks make her “interesting” rather than beautiful. She clings to the thought that her boring boyfriend Greg Hall loves her. They plan to marry, but Karen cheats on him, accepting guilt as the price she must pay for excitement.

Ellen Olson, a California girl with a passion for the beach, thinks a sorority is a great place to make friends; the free beer at fraternity exchanges is a big plus. If the extra costs of belonging to a sorority stings the father who has never been pleased with her looks or her choices, that’s an even bigger bonus. Ellen knows handsome bad boy Mike Dunn is not good for her, but she falls for his sexy edginess anyway.

Diane Ryan, a Navy brat from all over, partied hard her freshman year. Now her Navy pilot father has refused to pay her college bills and suggests ROTC as an option. Diane has dreams of following in her father’s footsteps as a Navy pilot, but her Southern belle mother insists on sorority membership to balance the predominantly male environment of ROTC.  She may be a guy magnet now, but years as an ugly “monkey baby” undermine her confidence. A bad experience with Midshipman Temptation, the gorgeous but self-absorbed Doug Anderson, leaves her reeling for years.

Laurie McCormick, daughter of a wealthy, emotionally distant San Francisco family, hopes the sorority will give her the close bonds she’s never had. She also hopes it will make it easier to reconnect with Pete Steinhagen, a Rho Delt she met and fell in love with while summering on Mackinac Island. But even when she and Pete become a couple in the eyes of their friends at ULA, she never feels certain of her place in his life. It turns out her instincts are right on the money.


Over their years as sorority sisters, these four form a bond as deep and lasting as any blood tie. They share booze and clothes and secrets. They party together, cry together, and have each other’s back at every turn.  Their circle enlarges to include Missy, Holly, Cindy, Joan, Candy, Lee, Pi, and good guy Matt Carlson, who makes them laugh. But the foursome is the core of the “Exclusives” who become sisters not for a season but for a lifetime. Their friendship endures over the next quarter century. They are there for one another through weddings, divorces, births, deaths, and the continuation of the cycle.

I’m a fan of Claudia Dain’s historical romances and an avid reader of women’s fiction with its focus on the female journey and women’s relationships with mothers, daughters, sisters, and friends. Thus, I’ve been interested in Sorority Sisters since I first learned that it would be Dain’s debut in a new genre under a new name, Claudia Welch. My reaction to it was mixed.

The characters Welch creates are interesting and likeable, and she effectively captures the music and mores of the 1970s. But for more than half the book I was an observer moving through various stages of interest rather than a reader caught up in a story that kept me eagerly turning pages. Too many scenes struck me as superficial. Readers who share the sorority experience may find it easier to relate to the characters than I did. Sororities were outlawed at my college, and my years teaching at a university where Greek life was significant came considerably later than the college period covered in this book.

Except for Diane, none of the characters appears invested in their education. College seems composed of rounds of drinking and hooking up, with an occasional reference to cutting class or final examinations. Welch uses first person point-of-view, alternating chapters among the four women, and after a time, the chapters had a second-verse, same-as-the-first feel to me. I frequently had to flip back to chapter beginnings to remind myself of the narrator’s identity.

The novel improved in pace and power once the women graduate. Their voices seemed more distinctive in these later chapters, and certainly their experiences are unique to the individual characters. Consequently, I was a far more engaged reader for the last hundred and fifty pages, moved to tears in places and cheering for the characters’ triumphs in others. I particularly loved the resolution of one romantic element and the long-term happy marriage of another couple. The late chapters of  Sorority Sisters were engaging enough to make me want to see more from Claudia Welch, women’s fiction author, but I’m still more enthusiastic about The Truth About Dutton, another in the Courtesan Chronicles from Claudia Dain.