Review - - Unraveling the Past

Unraveling the Past
The Truth about the Sullivans – Book 1
By Beth Andrews
Publisher:  Harlequin SuperRomance 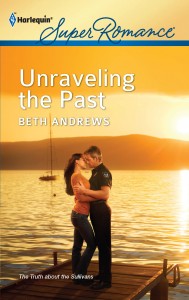 For Ross Taylor, taking the position of Police Chief in small Mystic Point, Massachusetts represents a chance for a new beginning for him and the teenage niece who’s recently come to live with him.  It’s not working out too well.  His niece is on the fast track to self-destruction and his fellow officers on the Mystic Point PD resent and mistrust his big city ways, especially his second in command, Layne Sullivan who had every reason to expect to be named to the position Ross now holds.   Then there’s that pesky mutual attraction between Ross and Layne that won’t go away even though both of them refuse to acknowledge it.

The oldest of three sisters who were abandoned as children by their mother, Layne Sullivan has grown up with a lack of trust, an overdeveloped sense of responsibility and a take charge attitude both on the job and with her family.  She doesn’t take orders easily or well, especially when issued by an outsider who, in her opinion, stole her promotion.  She’s set to fight him at every turn but when an unexpected discovery that rocks the foundation of everything she’s believed about her family pairs the two of them on the investigation, she gradually begins to view Ross, and herself, in a new light.  The pain of her childhood, however, is deeply ingrained to the point of being nearly insurmountable.  Will she have the strength to overcome her fears in time to embrace the love Ross offers?

One of the things I enjoy about Beth Andrews is her willingness to create less than perfect characters who struggle with the same issues that real people face every day.  It gives her stories a depth and wealth of emotion that I appreciate as a reader.

Ross and Layne encounter many such obstacles on their journey.  First, there’s the fact that he’s her boss and starting anything romantic between them is contrary to their mutual ethics and professionalism.  Rather than glossing over the issue, Andrews deals with it head-on.

Then there’s Layne’s dysfunctional childhood and the emotional scars she still carries.  She’s stubborn and abrasive but as her layers are slowly peeled away and we see the pain and vulnerability that lurk beneath her protective shell she becomes more relatable, more likeable.  That’s not to say she undergoes any major personality shifts.  She doesn’t.  But that’s okay.  She is who she is and that’s the woman Ross falls in love with.  Thank you, Ms. Andrews for not making Layne undergo a major change in order to be “worthy” of love.

And, finally, there’s Ross’s relationship with his niece; a teen with abandonment issues and a single uncle who has no clue how to relate to her.  Andrews doesn’t sugarcoat this relationship either, depicting it with all the frustration, heartbreak and tumult that can accompany an out of control teen and the by-the-book adult into whose life she’s been dropped.  Lessons need to be learned on both sides of this relationship and, ironically, it’s Layne, the woman with abandonment issues unable to help herself, who has the insight and ability to guide them and, especially, help Jessica begin the long journey to what I hope will be a happy, emotionally healthy life.

While only a secondary character, Jessica’s role in this story is prominent and, of all the characters, she’s the one who most touched my heart.  She’s only fifteen and, obviously, has a lot of growing up to do but I’d like to go on record right now.  Ms. Andrews, this young lady deserves a happy ending!  I sincerely hope that Jessica will return with her own story at some point in the future.

Woven into this romance is the mystery surrounding the mother of the Sullivan sisters and what really happened to her all those years ago.  We’re given a few clues in this book but complete answers will be unveiled over the next two books in the trilogy.   Needless to say, all three sisters have been significantly impacted by the events of their childhood as we can already see from their interactions in Unraveling the Past.

I look forward to both the unraveling of the mystery as well as the individual journeys of Layne’s sisters, Tori and Nora and, happily, readers won’t have to wait too long for their stories.  On Her Side (Nora’s story) will be published in August and followed by In This Town (Tori’s book) in October.   Knowing Beth Andrews, both are certain to be roller coasters of emotions packed into fast paced stories with intriguing, complex characters that keep me glued to the book from beginning to end and thinking about the characters long after I turn the final page.