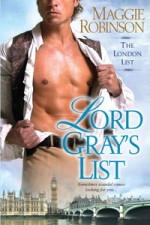 Baron Benton Gray has had just about enough of being the laughingstock of London.  For the past two years, the publisher of The London List has made it his mission to report Ben's activities, in lurid detail.  Every Tuesday, the citizens of London, including his staff and even his mother, rush to get their copies of the gossip sheet and read about Ben's latest exploits.   Strangers assume he lives for pleasure alone, his mother frets he'll never find a wife (as she says, "you're verging into desperate widow territory.") and the mysterious publisher of The London List is certain he hasn't a brain in his head.

Evangeline Ramsay had never had a true home nor a stable life with her gambler father until he had the good fortune to win a business in a card game.  When his health failed, Evangeline (Evie) insisted they settle in London and for the past two years, she has run the weekly tabloid, The London List disguised as a man - for no one would ever accept a woman as the manager of a business.  Everything is running smoothly until an angry Benton Gray bursts into the office one day, insisting she stop printing stories about him, and she finally finds herself face to face with the only man she's ever loved, the man who proposed marriage to her ten years ago, the man she rejected out of fear that he would grow into a man identical to her unreliable, gambling father.

Ben is stunned to discover the newspaper publisher who has been vilifying him on a weekly basis is the woman who broke his young heart all those years ago, a woman he is still wildly attracted to.  He tells her he wants to buy the paper.  She refuses.  He goes behind her back and, visiting her father in one of his rare lucid moments, buys the paper from him, intending to shut it down, but leaving more than enough money for Evie and her father to have everything they need.  However, when it becomes apparent that many people count on The London List for much more than entertainment, instead of closing the doors, Ben finds himself running the paper with Evie.  Will working side by side prove to Evie that Ben's more than just a pretty face?   Will Ben open his heart enough to let Evie back in, even though she shattered it all those years ago?  Will these two be able to keep their hands off each other long enough to get any work done?

Robinson has crafted a charming romance; fast-paced and fun, with snappy dialogue between the heroine and hero that reminded me of old Spencer Tracy-Katharine Hepburn movies.  Evie is starchy and uptight while Ben is easy-going and fun and both have histories that have molded them into the people they are today.  I adored Ben from the beginning though Evie was harder to warm up to.  I did understand, though, why she initially withheld her heart and her trust even while indulging in the red-hot desire between them.  Watching Ben slowly win her over while, at the same time, realizing some truths about himself was immensely gratifying.  And fun.  Did I mention fun?  This was one of the most fun couples I've read in a while.   Smart, sassy, sexy, snappy and fun.  I highly recommend Lord Gray's List and look forward to more stories in this new series from Maggie Robinson.