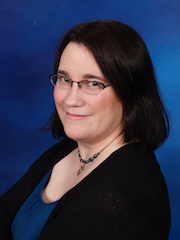 Susanna Fraser wrote her first novel in fourth grade. It starred a family of talking horses who ruled a magical land. In high school she started, but never finished, a succession of tales of girls who were just like her, only with long, naturally curly and often unusually colored hair, who, perhaps because of the hair, had much greater success with boys than she ever did.
Along the way she read her hometown library’s entire collection of Regency romance, fell in love with the works of Jane Austen, and discovered in Patrick O’Brian’s and Bernard Cornwell’s novels another side of the opening decades of the 19th century. When she started to write again as an adult, she knew exactly where she wanted to set her books. Her writing has come a long way from her youthful efforts, but she still tends to give her heroines great hair.
Susanna lives in the Pacific Northwest with her husband and daughter. When not writing or reading, she goes to baseball games, watches Chopped, Castle, and The Legend of Korra, and cooks her way through an ever-growing cookbook collection.  Find Susanna online at her website, on Twitter and Facebook. 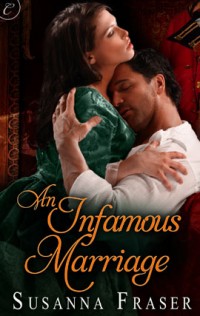 My new historical romance, An Infamous Marriage, is a marriage of convenience story. The hero, Jack Armstrong, meets the heroine, Elizabeth Hamilton, as her first husband, who happens to be Jack’s childhood best friend, lies dying. They marry because in her newly widowed state she is homeless and penniless, because he needs a caretaker for his ailing mother while he serves in the Army, and above all because it was her first husband’s dying wish.

I love a marriage of convenience setup in a historical because of the constraints and challenges it sets for the hero and heroine. They may hardly know each other, but they’re stuck together for life, since divorce is all but impossible to obtain. Jack and Elizabeth begin their marriage with no expectations of happiness whatsoever--only a determination to do their duty. They have a long journey ahead of them to find love together, but during their first dinner together as husband and wife, they discover themselves capable of sharing laughter:

“Was there someone else?” she asked. “Someone you wanted to carry to Scotland?”

“What would be the point of telling you if there was?” he snapped. “It can’t be, now.”

She sighed. None of this was his fault, but she couldn’t help envisioning some perfect, golden-haired young beauty, perhaps a general’s daughter, who had danced with Colonel Armstrong and dreamed of becoming his bride. “No. But if somewhere there is a lady who sees me as an enemy for ruining her hopes, I should like to be forewarned.”

“Fair enough.” He nodded curtly. “There was no one. No one I could marry, at least.”

Elizabeth chose not to press for more details on just what sort of women he couldn’t marry. No one expected men to be chaste before marriage. Even gentle, devout Giles hadn’t quite been a virgin.

But Jack seemed to misinterpret her silence, for he shook his head and blew out a frustrated breath. “Elizabeth,” he said gruffly, “we’ll make do. There have been worse-suited couples.”

“I hope so.” From their time together so far, she doubted it.

“Of course there have,” he said bracingly. “Why, look at the Prince of Wales.”

She smiled. The expression felt rusty from disuse. “Touché.”

Now Elizabeth couldn’t hold back a giggle. “And which wife?”

“All of them, I think. For a man who married six times, he didn’t have much of a knack for the state, did he? Though Anne Boleyn and Catherine Howard had the worst of it.”

She took a sip of her wine, eying him over the glass’s brim. “I do hope you prove a better husband than Henry,” she said. “I should hate to lose my head.”

He laughed, and she with him. When their merriment had passed, he watched her with greater warmth than she had yet seen from him. Elizabeth felt a stirring of something—not desire, it was too soon for desire—but of affection, of liking. She could see now why Giles had been his friend.

What about you, dear readers? Do you enjoy marriage of convenience stories? Which one is your favorite?

I’ll be giving one copy of An Infamous Marriage to a commenter on this post in your choice of e-book format, and at the end of the tour I'll be giving away a grand prize of a $50 gift certificate to their choice of Amazon, Barnes & Noble, or Powell's Books to one commenter on the tour as a whole. You get one entry per blog tour stop you comment upon, so check out my blog for the whole schedule! If you wish to be entered in the drawing, include your email address formatted as yourname AT yourhost DOT com.

I look forward to reading and responding to your comments, but since I live on the West Coast and have an 8-5 day job, I won’t be able to check in till my evening. 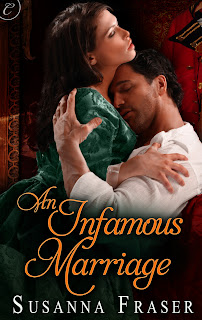 At long last, Britain is at peace, and General Jack Armstrong is coming home to the wife he barely knows. Wed for mutual convenience, their union unconsummated, the couple has exchanged only cold, dutiful letters. With no more wars to fight, Jack is ready to attempt a peace treaty of his own.

Elizabeth Armstrong is on the warpath. She never expected fidelity from the husband she knew for only a week, but his scandalous exploits have made her the object of pity for years. Now that he's back, she has no intention of sharing her bed with him—or providing him with an heir—unless he can earn her forgiveness. No matter what feelings he ignites within her…

Jack is not expecting a spirited, confident woman in place of the meek girl he left behind. As his desire intensifies, he wants much more than a marriage in name only. But winning his wife's love may be the greatest battle he's faced yet.