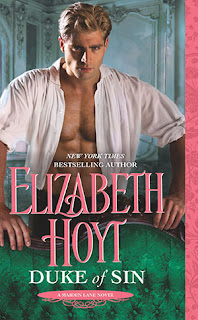 Six Reasons to Sin with the DUKE OF SIN

1.)   Val is frightfully gorgeous, deliciously immoral, and delightfully broken—does he have a heart? Does he have a soul even? Who knows? For those of us who love a good fixer-upper, Val has great bones and glorious potential, but clearly just needs some “rehab” work. Massive, massive rehab work.

2.)   Villains are the new heroes. First there was the Earl of Mayne. Then there was the Duke of Villiers and the Viscount St. Vincent. And then Elizabeth Hoyt laughed and said, “Oh, honey, if you want to meet a villain….” And the Duke of Montgomery was born. I admit it. Elizabeth Hoyt terrifies me a little. How does this woman sleep at night? There were things that made me go, “My god, who thinks of stuff like this” and my next immediate thought was, “Elizabeth Hoyt—that lovely sweet looking woman—thinks of this stuff.”

3.)   None of that “social barrier” baloney for Val. No, no, when it comes time to entertain the thought of marrying his housekeeper, it’s not the fact she’s only a housekeeper that’s the problem. Plus he’s a duke and can do whatever the hell he wants. Then again, considering reason #2, that would have been gilding the lily where “issues keeping the couple apart” was concerned. (Where does Elizabeth Hoyt get this stuff?)

4.)   Even the worst, filthiest, most sinful sinner has a moral code. I grant you, you have to dig deep most of the time to see Val’s, but rest assured, it’s there. As he proclaims, he might be the villain of this piece, but when it counts, he’s there. I had my doubts. I was halfway through the book going, “How is Elizabeth Hoyt going to make us love this man? I want to strangle him!”—and she does it. She’s magic like that.

5.)   Every bit of dialogue Val speaks sounds exactly like Tom Hiddleston—so if you have heard Tom Hiddleston speak (and Tom Hiddleston can even make complex mathematical equations sound extremely sexy), you’ll understand why you’ll put up with a little bit of bad behavior—blackmailing, kidnapping, excessive debauchery—to be with him. I also freely admit that knowing Tom Hiddleston was her inspiration for Val is a huge reason I kept going when I thought, “There is no way she’s going to pull a HEA out of this. No. Way.”

6.)   The Duke of Montgomery has a flair for the dramatic. And I do mean dramatic. Whether he’s making a point to his housekeeper about how he’s a villain and not a hero or saving the heroine from being a bacchanal sacrifice at a Lords of Chaos ceremony or even announcing he’s been tupping his housekeeper to the said housekeeper’s brother, well, he certainly knows how to put on a good show and deal with the subsequent fallout. Val is like a fictional character mix of Lestat from An Interview with a Vampire and the diabolical, chaotic mischief and self-destruction of Loki—as I said, dramatic.

I would rate this book a 4 ½ for me—maybe a 5 (though I find myself comparing this story to Sweetest Scoundrel—and I did love Asa better)—I love all the Maiden Lane series and will read them and re-read them. Lord Caire…the Ghosts of St. Giles…Smiling Mickey…and all the heroes of the series are just swooningly, heart-throbbingly delicious. Val is no exception—he is swooningly, heart-throbbingly delicious, but he scares me a bit, even when tamed. There is no doubt that though Val has been “saved” by the love of the right woman who understands him and reminds him of his good self, beneath he’s still very much a wild animal not to be trifled with.

And the darkness that creates such a villain and makes him leap from the page comes from the kind of darkness that cannot be forgotten or wished away. I’ve always admired and respected Hoyt’s dark complexity of her settings, from where we met Lord Caire and that whole horrible gin enterprise and all the dark, seedy underbelly of London during this period, but the Lords of Chaos and the history that created Val make Lord Caire look like a Care Bear in comparison.

All the things one loves about Hoyt’s romances are there, in spades, but I do feel this book is her darkest yet. Wonderful, but dark.