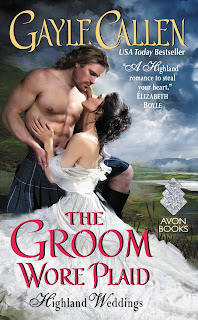 The follow-up to The Wrong Bride, The Groom Wore Plaid’s hero and heroine, Owen Duff and Maggie McCallum have agreed to honor the marriage agreement that Owen’s father tried to cheat the family out of having to fulfill (see: The Wrong Bride). Maggie has loved Owen from girlhood and at first believes this is a dream come true. Until she has one of her prophecy dreams, in which she sees Owen die on their wedding day. Thus, she spends the rest of the book trying to convince Owen (a man of science, no less) that her gift-curse is real and if they marry, he will die.

Owen, of course, thinks she’s just saying whatever to get out of marriage, innocent that she is, and he keeps trying to reassure her their marriage will be fine. Nothing to be afraid of. She does a number of things to turn him off her: dressing as if she were getting fat and unattractive, acting in ways that would embarrass him, and a number of other tried and true marriage-killers. None of them work, because Owen—the man of science—knows she’s just being superstitious and silly and he will prove nothing is going to happen.

Of course, there are disturbing incidents made against Maggie—someone clearly doesn’t want her to be part of the clan. Owen rationalizes most of these, but does make sure there are more people around his bride-to-be, just in case. For reasons I’m still not clear on, they end up making love; and a week or so later, Maggie comes to Owen and says she’s reluctantly agreeing to marry him after all because she had another dream in which it was revealed she is carrying his child and she doesn’t want her child born a bastard.

On the day of their wedding, after a day of festivities, Owen is stabbed and left bleeding to die. Her dream is coming to truth after all. After some scrambling around, the culprit is discovered…and it is discovered Owen had requested a doctor to stay with them during the wedding festivities so Owen is saved after all. He didn’t believe her, per se, but he respected her fears enough to make sure a doctor was on hand.


I did not enjoy this one quite as much as The Wrong Bride. I could not read it straight through and I did not form attachments to either Owen or Maggie (i.e. I did not care about their outcomes). Part of me was annoyed by Owen’s rather patronizing way with Maggie, how he didn’t respect her gift, which while logical for the character did not make me believe this story could end in happily ever after when he couldn’t respect her beliefs. Maggie’s behavior confused me and I simply could not lose myself or believe in the romantic storyline of these characters. I give it 3 stars for these reasons.