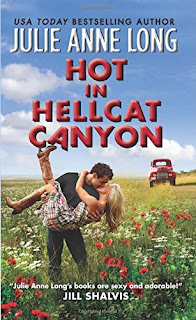 Unroll the banners, strike up the band, and profligately fling confetti. Julie Anne Long’s debut as a contemporary romance author is reason enough for romance readers to celebrate. Hot in Hellcat Canyon is funny, sexy, smart, and heart-melting. I added it to my best of 2016 list the minute I completed my first reading.

After her life in Southern California disintegrated, Britt Langley retreated to Hellcat Canyon, a quirky small town in historic Gold Rush country. She works as a waitress at the Misty Cat Saloon and as manager for Gold Nugget Property Management. She enjoys the individuals that make up the Hellcat community while preserving a distance that protects her privacy and her heart.  Her past is past chronologically, but its effects are still very much with Britt. Just the name of her former husband is enough to paralyze her with fear.

John Tennessee McCord, known as J. T., is a forty-year-old actor best known for Blood Brothers, a popular television series in which J. T. played a cop, and as half of a super couple that ruled as media darlings for five years (in the tradition of Bennifer and Brangelina). But Blood Brothers is seen only in reruns nearly a decade after its final episode, the super couple is history, and J. T.’s recent films, although they have won him critical acclaim, have not been commercial successes. He is hopeful that The Rush, the new TV series set in the California Gold Rush in which he is set to star, will be received more warmly. On his way to a friend’s wedding, he decides to check out the site where The Rush will be filmed. His truck breaks down in Hellcat Canyon, and what was meant to be a brief stay becomes an extended one.

Britt and J.T. meet when he stops at the Misty Cat. The scene that introduces J. T. is just one example of the brilliance of Long’s word craft in this book as she evokes the hero of an old-time Western, has Britt draw the comparison, and ends with a simple statement that awards J. T. that heroic stature. The attraction between Britt and J. T. is immediate, but it involves more than physical appeal. They appreciate one another’s intelligence and ready wit from the first, and as they get to know one another better, the attraction encompasses all the dimensions of the persons they are. J. T.’s celebrity world intrudes on their idyll, bringing complications in the guise of a long-time frenemy and J. T.’s glamorous and scheming ex, but it is Britt’s fears that are the biggest obstacle to their HEA.

When Julie Anne Long announced that her next book after the long-awaited Legend of Lyon Redmond would be a contemporary romance, I went into mourning. Her historical romances have been a highlight of my reading year for more than a decade, and while I did not doubt that her contemporary romance would be written with her usual skill and grace, I did question if it could possibly compare to the Pennyroyal Green books. My worries were wasted. Hot in Hellcat Canyon showcases this author’s deft characterization, attention-grabbing plots, and wondrous prose—all the qualities that made me love her historicals.

Words are inadequate to express my delight in watching Britt and J. T. fall in love. First, there is the fact that these are characters who have lived. Their years have developed their characters, and neither is defined by one bad love affair. Even more rewarding is the fact that they are fully dimensional characters, and the progress of their relationship involves all these dimensions. I loved that J. T. is initially intrigued by Britt’s use of “enigmatic” in conversation. The sexual tension is high and the love scenes sizzle, but there is a refreshing absence of the insta-lust that too often prevails in current contemporary romance. When Britt thinks about her first encounter with J. T., her thoughts are anything but generic sexual longing. They are specific to Britt and J. T., and for readers, they touch what Faulkner called the “resonant strings of remembering.”

Because from the moment he’d walked in, it was as if someone had dialed the universe up a notch: all the colors were just a little brighter and everything seemed more distinct and more beautiful, and her very blood seemed to buzz.

And oh, that first kiss. I do love an author who understands how important that scene is. Long had already won a place on my best-first-kiss scenes ever with What I Did for a Duke (2011), but I think this one is even better. To give you just a brief sample . . .

And then her eyes closed, and magically, as if they both knew this was the next step in the dance, they were leaning into each other, and his lips leisurely, softly brushed across hers. It was the kind of caress, he knew from experience, that let all of your other nerve endings know that mind-blowing pleasure was on its way.

The humor is another delight, and it ranges from subtle wit to physical comedy. I particularly loved J. T.’s reaction to the girly bread-and-breakfast and Britt and friend as inebriated artists. Although Long keeps the focus on the romance, she also shows the reader Hellcat Canyon as a physical place and as a community. It is as if the reader is watching as a gifted painter creates a landscape or a brilliant cinematographer captures the features and the faces. Only the medium this artist uses is words. From the pets to the jerks to the town eccentrics, the secondary and tertiary characters are individuals who have their own stories. With enthusiasm and eagerness, I await whichever of those Hellcat Canyon stories Long chooses to tell in coming months and years.

I give Hot in Hellcat Canyon my highest recommendation. I’ve read it twice, and writing this review has left me hungry to read it again. If you love contemporary romance, be sure this one is on your TBR list. I have the feeling that it will be showing up on many lists at year’s end.