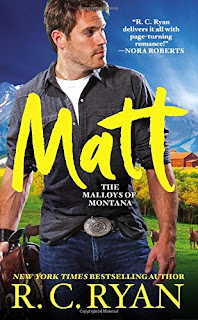 Matt Malloy’s happy-go-lucky existence on his family’s sprawling Montana ranch is turned upside down when he meets animal rights lawyer, Vanessa Kettering, who has come to their ranch to interview his grandmother. The two fall immediately head over heels for each other, but Vanessa is soon in danger. Her top attorney father is prosecuting a famous mobster whose resources reach everywhere, including where Vanessa is located. It is decided Vanessa must immediately go to a safe house until the trial is over (roughly two weeks to a month). Matt volunteers the ranch as a safe house. The mobster couldn’t possibly find Vanessa way out here in the middle of nowhere and protected by all his family, mostly made up of burly, rife-packing men.

Matt and Vanessa immediately use this time to romance each other even more, but a cozy little cabin retreat goes wrong and Matt is left for dead and Vanessa is kidnapped by the very men he was supposed to protect her from. Shot, set on fire, and barely conscious, Matt refuses to stop until he finds her again—and finds her he does, just seconds from being killed by the henchmen who are creating a video to send to her father. She is taken back home to Chicago by her father to be cared for, but she makes her way back to her cowboy for a reunion for a happily ever after.

So my issues with this story were this: 1.) there was no romantic conflict of any kind—these two were the cheerleader and quarterback homecoming queen and king and I found their romance dull. Just my preference. I like tortured, complicated people. They were not. 2.) For a safe house, they did stupid, stupid things that I didn’t think a safe house would remotely do—so it was hard to suspend belief that this plot twist would actually happen. Even possibly. It seems if this really happened, the police would have made her go to whatever safe house they had that nobody knew about—and Matt would have to cool his heels a few weeks until the trial was over. It wouldn’t be that big a deal. 3.) She wasn’t a particularly strong heroine—this probably made her more real overall, but again, for my preferences, I prefer heroines who can be a bit more clever and proactive than she was rather than waiting around to be rescued. As you can see, these are my issues—and not true flaws with the story. Other readers are probably dying to get their hands on a book where the heroine isn’t automatically an ass-kicking Angelina Jolie type or so dark and twisted, she’d need three therapists. Also, not every romance in the world needs to be deep, dark, and complicated. Just the ones I read.