Review - - Temptations of a Wallflower 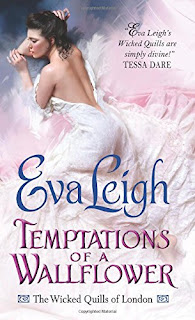 Lady Sarah Frampton is not a social success, despite her status as daughter of the Duke of Wakefield. In fact, after five seasons, her tendency to observe rather than participate in society’s rituals has earned her the sobriquet the “Watching Wallflower.” In Sarah’s case, appearances are quite deceptive. Not only does Sarah enjoy an active interior life, but she is also the anonymous author of erotic novels that have proved satisfyingly successful. Of course, her authorship is a closely guarded secret because revealing that she is the “Lady of Dubious Quality” would provoke a scandal that would ruin her and damage her family.

Jeremy Cleland (shades of Fanny Hill!), the third son of the Earl of Hutton, is a vicar in a Devonshire village. Although he followed his dictatorial father’s plans by entering the church, he finds the role of vicar a good fit for him in some ways. However, the limitations of the life have increasingly weighed upon him recently. A lover of harmony by nature and dependent upon his father’s purse to supplement the small stipend of a village vicar, he does not hesitate when his father summons him to London. The earl, who views himself as a guardian of public morals, has an assignment for his vicar son: to discover the identity of the Lady of Dubious Quality, reveal her as the immoral creature she is, and destroy her scandalous writing career. Jeremy, secretly part of the lady’s readership himself, is reluctant to take on the task, but his reservations are no match for his father’s crusading spirit.

When Sarah and Jeremy meet, the attraction between them, physical and emotional, is immediate and powerful. They each instinctively recognize a kindred spirit in the other. For the first time, Sarah encounters a man who awakens in her the intense desire she has heretofore found only in her fictional characters. But even aside from the fact that Jeremy is committed to exposing Sarah’s secret identity, the gulf between a village vicar and a duke’s daughter is enormous. Nevertheless, when Sarah concludes that marriage offers her best means of protecting her secret, Jeremy is the only man she considers. But with the secret of Sarah’s writing identity between them, can they find enduring happiness together?

Temptations of a Wallflower is the third book in Leigh’s Wicked Quills of London series, and like the earlier books (Forever Your Earl and Scandal Takes the Stage), it is a gem of a book that blends feminist themes, engaging characters, and sensual romance that succeeds on multiple levels. Sarah and Jeremy are interesting protagonists whose complexity is far greater than their surface personalities suggest. It doesn’t hurt that I have a decided weakness for stories featuring vicars and wallflowers. To have both in a single novel is joyous indeed. I have grown increasingly weary of heroes and heroines whose libidos control them from their first glimpse of each other, but Sarah and Jeremy restored my faith in instant romance. I also loved that although they are inexperienced (Sarah is a virgin; Jeremy is not far removed from that state), they are not ignorant. On a delightful note, Jeremy gets some useful instruction from a book that he has no idea his wife wrote. Another plus is that both heroine and hero grow during the course of the novel, and their love is central to their growth. It frees them to become more fully themselves.
This novel is also metafiction that offers some wonderful insights into what it means for writing to be a vocation. Sarah is clear about who she is and on the role writing plays in her life. “I wanted everything. To write, and to love you. My books aren't foolish to me. Writing is who I am. I can't not write. If I did, I'd cease to exist.” Writers in any genre should relate to her description of finding her own voice.

I highly recommend this book. If, like me, you have found yourself skimming or even skipping sections or even full chapters of romance novels in which love scenes/sex scenes appear to have no purpose other than to increase the heat level, you will rejoice in reading a book with a high sensuality level in which such scenes are not extraneous but rather integral to who the characters are and to the journeys they make. I have added this one to my Best of 2016 list, and I look forward with great anticipation to seeing what Eva Leigh has next for her readers.