Review and Q&A - - When a Marquess Loves a Woman 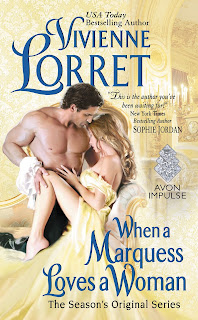 When the title of a book sets you to humming and swaying to a ‘60s R&B hit, I’d say you have a winner. That is exactly how I felt when I heard the title of Vivienne Lorret’s When A Marquess Loves A Woman and even more so after I read it. The book is the third of her The Season’s Original series. It follows Lady Julia Granworth, newly widowed and Max, a newly minted Marquess and their wager to declare their personal picks named the Season’s Original.

As we are introduced to them we find that Max and Julia have a long history. Five years earlier, they started out as friends who knew and understood one another as no one else did but one stolen kiss robs them of making a life for themselves despite society’s censure. Even though Max is a first son, he is without title or prospects and Julia is at the mercy of her father’s need for her to make an advantageous match. Even so, Max tries to do the honorable thing but is shunned and Julia is whisked away to wed another.

Following the death of her husband, Julia returns to London a rich widow and would like nothing more than to be independent and return to her childhood home which is up for sale. Max has since gained a title and money and can now have anything he wants. Still stung by her rejection he finds that what he wants is Julia’s townhouse and buys it out from under her nose. She is enraged.

In order to best one another, they decide on that wager but come to a draw when no Original is named. With few weeks left to the season, they decide to make the same wager again but this time the terms have changed. If Julia wins, she gets back her townhouse. If she loses, she must leave London, never to return. They place the names of their Originals in a box for the butler to keep.

Max never reveals who his Original is but Julia chooses a favorite son of the ton, Viscount Ellery. He is all that is charming, handsome and chivalrous.  Julia strives to make his shiny armour glimmer even more in the eyes of the ton. A seemingly easy task given his personality and the manner in which he conducts himself. We do come to find that he has a bit of steel in him. A bit of steel that this reader wouldn’t mind seeing more of.

Max and Julia’s efforts to keep their candidates in the limelight force them together more often than not. They rediscover that they know each other quite well and recognize qualities others have overlooked.  Julia is seen as shallow and Max was of no consequence until he became titled.

It’s a delight to see this development. They cannot deny they are attracted to one another. Their banter is delicious. They are tried and true supporters to family and friends and would do anything for them. There are also plenty of unsavory characters who cause strife for the couple including Max’s own half-brother who is as self absorbed and self righteous as they come. He causes quite a stir, as do the dealings of a scam artist that nearly ruins many of the ton and cripples the banks of that time period.

But in the end, love triumphs once again. Max and Julia bring out the best in one another and celebrate their depths. Keep your eye out for gilded cages and their tiny doors that manage to keep us trapped within. It will melt your heart.

I would highly recommend this book to anyone. It works wonderfully as a stand alone but, if you haven’t read Vivienne Lorret’s books before, you will find yourself reaching for more. I know that I cannot wait to see if more of the secondary characters in this series will get stories of their own. I’m a patient reader and I’ll just keep myself entertained glomming her backlist.

Santa: What are you working on now? Book? Proposal? Novella? I'm a hungry gal.
Vivienne: I'm currently working on a proposal for a potential new series set in late-Regency London. Working on it and getting to know an entirely new cast of characters is a lot of fun!

Santa: When you sit down to start on a project, do you sketch it all out or go where the muse takes you?

Vivienne: It's a little of both, actually. I construct the bones of the story beforehand (setting, conflict, and characters), and add the brain and the heart (back-stories and ultimate goals). After that, filling in the sinew and tissue (aka: how the characters move through each scene) is somewhat of a mystery.

For me, part of the fun of writing is surprising myself. I want to be shocked, to have my head spin, to fall in love, to laugh out loud, and even to cry (with only my empty house to witness my mania, of course). ;)

Santa: You have a few series under your belt. Do you see any characters from one series hopping over to another one or the next series you may be doing?

Vivienne: Just between you and me, I enjoy slipping in a guest appearance or two from one 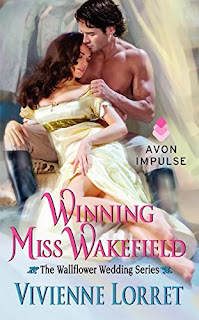 series to the next. In WHEN A MARQUESS LOVES A WOMAN, I casually mentioned the Marquess of Knightswold (Bane, from Winning Miss Wakefield).

I wouldn't be surprised if another character happened to pop up in the next series, too.

Santa: Who is your favorite character or do you fall in love with each as you write them?

Vivienne: While I'm writing, I fall in love with each of my characters, wanting to give them the happily-ever-after they deserve. It was the same with the Season's Original Series. However, I did find myself distracted on more than one occasion by Max and Juliet. I couldn't wait to write their story!

Santa: Back to question number one...
There is a delightful character in your Season's Original series who has been with us from the very beginning and who, I think, deserves their own HEA. Viscount Ellery has been ever the gentleman but we saw some fire in him in When a Marquess Loves a Woman. I suspected as much. And what of the scandalized Gemma? She deserves a HEA. Not so sure about Bram. A bit of a prig to put it mildly. What are your plans for these characters?

Vivienne: Poor Ellery! He's a handsome, courteous, boy-next-door type who can't seem to get the girl. 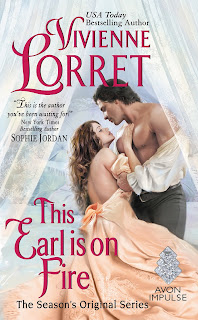 First, there was Lilah (The Debutante is Mine). According to the Duke of Vale's Marriage Formula, they were a perfect match, but her heart chose Jack, instead. Briefly, he met Adeline (This Earl is on Fire), but her heart was already taken by Liam. Then there was Juliet (When a Marquess Loves a Woman). She saw all of his wonderful qualities, and even shared common interests, but Max's kiss had already ruined her for all other men.
I think it's time for Ellery to get the girl, don't you?

Coincidentally, Gemma Desmond needs a husband. Desperately. The only problem is, her father’s crimes have tarnished her reputation and she fears that no honorable man will have her. At least, until she meets Ellery and begins to hope that love might very well conquer all.


But things aren’t that simple for Gemma—especially not when the waspish Miss Leeds and Miss Ashbury are determined to keep her from Ellery. Oh yes, they’re at it again! Using all the venom in their collective stingers, they set about to destroy the only chance Gemma has for happily-ever-after.


Will Gemma ever escape the crimes of her father? Will Ellery come to her rescue? Will love prevail in the end? Will Miss Ashbury and Miss Leeds finally get their just desserts?


Hmm… There’s no telling how the story will end. I mean, I could tell you… but that would spoil the anticipation. ; )

Santa: Thanks for answering my questions. Would you like to ask our readers anything?

Vivienne: Sure! I’d love to know if there are any characters (from any of the series) you wish had their own stories.

Thank you for having me here today! I’ve had a wonderful time!
If you’re interested in what’s coming next, please sign up for my newsletter at www.vivlorret.net
Have an amazing day!
Posted by pjpuppymom at 12:00 AM