Review - - The Perks of Loving a Scoundrel 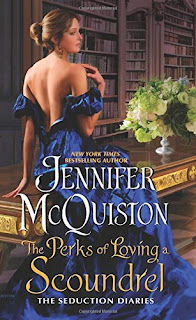 Ms. McQuiston turns the “cute meet” on its ear with this opener: heroine, Mary Channing catches roguish Geoffrey West urinating in the bushes of her sister’s townhouse. The London-shy soon-to-be-out-and-about introvert soon brushes up against him again, this time at a dinner party featuring Mr. Dickens and Elizabeth Gaskell. Mary had retreated to the hostess’ library; and West, spying the winsome stranger in blue, followed her, thinking to introduce himself to who he thinks is a widow. Upon realizing his mistake, he goes to leave; however, the door opens and he whisks them both behind a curtain so they aren’t compromised. They overhear a plot to kill Queen Victoria—and just as they come out behind the curtains (after the would-be assassins leave), the door opens again and catches them both, compromised and Mary ruined.

Geoffrey West has a dubious reputation at best and a notorious rake of all scoundrels at worst. It’s been rumored he’s slept with a corpse after all (which he confirms later when she asks). He’s very much the little boy who cries wolf, the ultimate prankster. In fact, you may recall his antics from McQuiston’s previous novel featuring his sister, Lucy. (He sent her a letter with poison ivy.) He loves pranks, the more juvenile the better. He doesn’t seem to take anything seriously, and certainly not the fact he was given the Victoria Cross for his heroism in Crimea. His commitment to being a ne’er-do-well has successfully covered any seriousness he might possess.

Therefore, isn’t it ironic—or more likely, EXPECTED—when no one believes him when he does try to go to the Home Office and explain about a death threat on the queen? In fact, it’s clearly a big whopper to cover the fact he’s compromised a quiet, nice girl like Mary and doesn’t want to “pay the piper” so to speak. Never mind that Mary doesn’t want to marry him. He’s wild, frequently drunk, and seems to be the world’s biggest fribble. And he doesn’t seem remotely concerned about what is clearly a death threat on the queen.

When Mary gets a death threat for her search for the assassins, West persuades her to marry him so he can protect her properly. Together they continue to look for the killers, though West does his best to make sure her work on this project is minimal at best. In the nick of time, disaster is averted; however, the discovery of the villains is a punch in the gut for all.

Mary and West’s banter throughout the book is charming and funny. I felt they had real chemistry; and they brought out the best in each other. However, Mary’s penchant for danger made her a little frustrating (if you get annoyed by TSTL behavior, you may find this frustrating); and West can come across as more a wild frat boy than a man who is dealing with PTSD from his time in Crimea. The pacing is quick and the dialogue is strong—and meeting Queen Victoria is the cherry on this sundae.