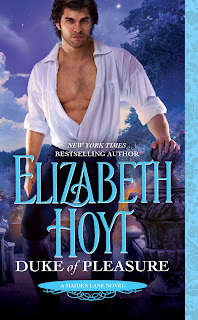 The Duke of Kyle is on the hunt for the Lords of Chaos, a secret society of lords who dress in masquerade and live in excess, known for raping, killing, and pedophilia; and his interest has earned him a price on his head. Kyle hires the enterprising St. Giles urchin, Alf, for his expertise in finding out information, namely who tried to kill him and nearly succeeded. In fact if it wasn’t for the timely rescue of the Ghost of St. Giles—a woman!—he wouldn’t be able to hire anyone to find out anything.

Alf, also known as the Ghost of St. Giles, is nervous when Kyle approaches her for her assistance. After all, after she rescued him, she kissed him—a kiss she can’t forget—did he know? It soon becomes apparent he is unaware she’s a woman, let alone the Ghost. She agrees to his request to find the men who tried to kill him; however, her questions soon bring down the same men on her and she barely escapes for her life and runs to Kyle’s house.

Kyle takes her in, feeling guilty he put a child in danger, and soon after, he discovers Alf is the St. Giles Ghost…and more importantly, a woman. He cannot keep her out of his mind or his bed as they work together to find out all the men who belong to the Lords of Chaos. The problem is can he let go of his past and allow himself to fall in love with the one woman most perfect for him?

This novel in the Maiden Lane series is welcomingly lighter than its predecessor. Although the arc regarding the Lords of Chaos is a dark one and has been featured in a book or two already—and is going to feature in the book coming after this one (Duke of Desire), the action scenes felt much lighter than in previous books. It is also refreshing to have a woman action-hero whom the hero trusts to do the kind of work that is ultimately dangerous, but that he knows she is capable of handling. The hero and heroine felt very much like equals, even though he is the illegitimate son of the king and she is a guttersnipe; and the reasons for keeping them apart do not have to do with her believing she is not good enough for him (or vise versa).


I love this series. Ms. Hoyt always keeps this series fresh and sexy, dark and emotional. As always, I want to go back and reread all the books in the series and fall in love with all the characters again. (I’m not sure who inspired Kyle for this story I know Tom Hiddleston—squee!—was the inspiration for the Duke of Sin; and I believe Jason Isaacs was the inspiration for Lord Caire, the first hero of the series. But I wonder if Ms. Hoyt has been watching some episodes of Poldark with the rest of us, because Kyle’s black hair, black eyes, and smiles remind me of Aiden Turner. A reader can dream, yes?)

The ebook edition of WICKED INTENTIONS, the first book in Elizabeth Hoyt’s bestselling Maiden Lane series will be FREE from November 28th through December 12th. On December 13th the price returns to $5.99.