The third book in Sabrina Jeffries' The Sinful Suitors series releases on November 22nd and I am counting the days! The first two books, The Art of Sinning and The Study of Seduction (read my review) were keepers for me and have me eagerly anticipating Warren's story in the upcoming The Danger of Desire. To celebrate her new book, Sabrina Jeffries is sharing an excerpt of The Danger of Desire and giving away an autographed copy to one lucky Dish reader. (details at the end of this post) 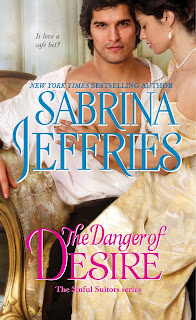 To root out the card cheat responsible for her brother's death, Miss Delia Trevor spends her evenings dancing her way through high society balls, and her late nights disguised as a young man gambling her way through London's gaming hells. Then one night, handsome Warren Corry, the Marquess of Knightford, a notorious member of St. George's Club, recognizes her. When he threatens to reveal her secret, she's determined to keep him from ruining her plans, even if it means playing a cat-and-mouse game with the enigmatic rakehell.

Warren knows the danger of her game, and he refuses to watch her lose everything while gaining justice for her late brother. But when she starts to delve beneath his carefully crafted fa‡çade, can he keep her at arm's length while still protecting her? Or will their hot desires explode into a love that transcends the secrets of their pasts?

The Danger of Desire
Excerpt

Luncheon was nearly finished, and Warren had done what he’d come to do. So after a few more moments of polite conversation, during which Delia glared at him rather fetchingly, he told them he regretted that he had more calls to make.
When he rose to leave, Delia stood, too. “I’ll see his lordship out.”
“Why, thank you, dear girl,” her aunt said. “I’m sure he would get lost otherwise.”
Ignoring her aunt’s tart remark, Delia led him from the room. As soon as they were in the hall and out of earshot, she muttered, “That was a dirty trick.”
“You mean, like the dirty trick you played last night by dumping a bottle of wine into my lap? You ruined a perfectly good shirt, you know.”
“Is that why you’re tormenting me today? I can pay you for the shirt.”
“I don’t doubt you can. Given the rumors I heard at Dickson’s, you must have acquired a tidy sum by now. You ought to quit before you’re caught.” He shot her a quelling glance.
Judging from her scowl, she wasn’t the least bit quelled. “Is that a threat? If I don’t quit, you’ll tell my aunt?”
“Don’t tempt me.”
She glanced about, saw no one near, and tugged him into the parlor they were passing. “What do I have to do to ensure that you allow me to continue my activities? I’m sure I have something you want.”
He raked his gaze down her fetching form. “Oh, you have plenty I want, but nothing I can have.”
Though she colored at the innuendo, she met his gaze evenly. “That’s not true.” There was a hint of desperation in her tone. “I know you probably don’t find me that pretty, but you did seem to enjoy our kisses in the garden and . . . well . . . I would be willing . . . that is . . .”
God help him. “I do hope you’re not implying what I think you are,” he clipped out.
Her cheeks shone scarlet now. “I’m just pointing out that if you wanted to, as you put it, ‘satisfy’ your desires ‘without marrying’—”
“I would go to a bloody brothel.” Anger roared up in him that she would even consider selling herself to keep him quiet. Or think him the sort to gleefully accept such an offer. “You may not believe this, but I am a respectable gentleman. I do not blackmail young women into giving me their virtue. Good day, Miss Trevor.”
When he turned for the door, she caught his arm. “It wouldn’t be like that. I’d offer myself freely.”
He glared down at her. “Would you, indeed?” She clearly actually believed that nonsense. Either that, or their dalliance in the garden had filled her head with moonbeams. Time to shatter that delusion.


Giving her no warning, he pushed her against the wall behind the open door and crushed her lips under his. This time he took her mouth with merciless disregard for her stunned response. And when, to his mingled shock and delight, she let him, he went a step further . . .

Do you enjoy books where the heroine infiltrates male-only establishments in disguise?

Have you started reading Sabrina Jeffries' Sinful Suitors series yet?

One randomly chosen person leaving a comment will receive an autographed print copy of The Danger of Desire.
US/Canada addresses only.
Deadline to enter giveaway is 11:00 PM (EST), November 20, 2016.