The Dare and the Doctor
By Kate Noble
Publisher: Pocket
Release Date: November 22, 2016 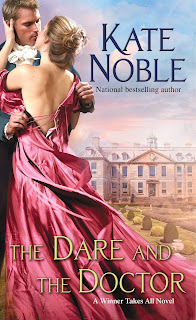 The Dare and the Doctor, the third novel in Kate Noble’s Winner Takes All series, appears to be an epistolary novel in the first chapter as the reader shares in letters between Miss Margaret Babcock, the socially awkward daughter of Sir Barty Babcock, and Dr. Rhys Gray. Margaret grew up helping her mother make things grow in the garden and in the greenhouse. Her mother died when Margaret was sixteen, and four years later Margaret finds making things grow is both rewarding for its own sake and as a way of feeling connected to her mother. A skilled amateur horticulturalist, Margaret is particularly pleased with the results of hybridizing her mother’s cherished China rose with a sturdier English variety. Her excitement increases when Rhys writes to tell her that he has shared the news of her hybrid rose with a member of the Horticultural Society of London who extended an invitation to Margaret to present her hybrid to the society. Margaret is leery of change and of society beyond her limited circle, but the chance to present her rose and to see Rhys prove temptation enough to lure her from her Lincolnshire greenhouse to London for a visit.

Rhys is delighted that Margaret has agreed to visit London. Even as he assures himself and his friends Phoebe and Ned, the Earl and Countess of Ashby (The Game and the Governess), that his correspondence with Margaret had been academic in nature and that their relationship is strictly platonic, Rhys is making plans to spend as much time as possible with Margaret. He has all but forgotten his mother’s scheme for a marriage between Rhys, her dependable doctor son, and Sylvia Morton, the pretty daughter of a neighbor, a marriage that will end a feud and restore the reputations of Rhys’s father and elder brother sufficiently to allow them to return to England from their exile on the Continent. Despite Rhys’s repeated insistence that he has not agreed to the marriage, everyone else acts as if the betrothal is a certainty.

As Margaret and Rhys spend more time together, a growing attraction adds to their firm friendship, but a romance between them seems hopeless. Rhys may be reluctant to do his duty to redeem his family’s standing in society, but clearly he cares for them and cannot ignore the problem that is within his power to remedy. Margaret understands his dilemma and is eager to return to her father’s estate and the safety of her greenhouse. When Rhys continues to postpone acting, someone else acts for him. Has his own indecision separated him and Margaret forever, or will he find a way to free himself from a deceiver’s trap?

I am one of the readers of The Lie and the Lady (Book 2, Winner Takes All) who longed for Margaret and Rhys’s story. I loved both these characters in that book and believed that the relationship between these two science-obsessed introverts contained the seeds of an HEA. The Dare and the Doctor satisfied all my expectations and offered a friends-to-lovers tale in which both the friendship and the romance are persuasively developed. The opening chapter shows a year in the lives of Margaret and Rhys through the letters they exchange. The growth of their friendship is documented through these letters, moving from genuine liking and respect based on mutual interests to the intimacy of deep friendship. The reader is prepared to see the friendship progress to romantic love when the two are reunited in London. The elation both Margaret and Rhys experience at the thought of seeing one another reveals that feelings other than friendship are present even if they are too shy to admit to them.

This is a quiet book, and some readers may find Rhys and to a lesser degree, Margaret too passive. However, if you prefer your romances character-driven and appreciate a story in which the protagonists are more at home in environs related to professional interests than in ballrooms and other sites of social gatherings and if you have an affection for romances that are more tender than tempestuous, I think you will like this book as much as I did. As a Kate Noble fan since her first historical romance, I recommend the full series, but The Dare and the Doctor can be read as a standalone. I recommend you add this one to your TBR list.

Please note, you can enter at all participating blogs but you can only win once. The Romance Dish winner will be announced November 26th from all comments posted before 11:00 PM, November 25th. (US addresses only)

Do you enjoy stories that are, as Janga notes in her review, "more tender than tempestuous?"

Are you reading Kate Noble's Winner Takes All series?

National bestselling author Kate Noble’s THE DARE AND THE DOCTOR lures readers back to the dazzling, irresistible Winner Takes All Regency Romance series. Margaret Babcock has always been content with her quiet life in the country. But every now and then, she feels the urge to spread her wings. Her late mother used to whisper, “What’s the worst that could happen?” at the start of an adventure, and now Margaret’s continuing the tradition. So when Dr. Rhys Gray, her longtime correspondent on matters botanical, invites her to speak to the London Horticultural Society about her new rose hybrid, she accepts. She’s excited about her first visit to London, but even more so about getting to see her friend Dr. Gray. When she arrives, Rhys is eager to show her the wonders of the city, and the two spend many happy hours together just as friends, of course! But would friends miss each other quite as fiercely when they’re apart; or feel such a spark when they’re together? Margaret finds that friendship with Rhys is much more complicated than she’d imagined…especially when it turns out her friend has forgotten that he may be promised to another woman. 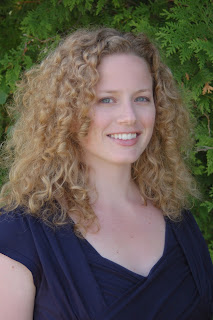 Kate Noble is the national bestselling author of The Lie and the Lady, The Game and the Governess, third in the witty, sexy Winner Takes All Regency Series, and the critically acclaimed, RITA Award-nominated Blue Raven series. Under the name Kate Rorick, she writes for television, as well as novels based on the Emmy Award-winning web series The Lizzie Bennet Diaries, for which she is also a writer and producer. She lives in Los Angeles. Visit Kate at katenoble.com, Facebook, and Twitter.