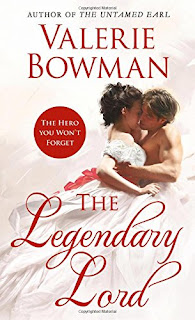 When Christian Forester, Viscount Berkeley, flees the stuffy ballrooms of London for his Scottish hunting lodge, the last thing he expects to find ensconced before his fire is an incredibly beautiful woman. But the plight of lovely Sarah Highgate, who has run away from an unwanted betrothal, inspires an eminently practical exchange. He'll safeguard her reputation with the ton while she advises him how to best attract a proper bride...

As the undisputed belle of the season, Sarah has enchanted plenty of suitors. Still, she isn't interested in marriage, especially not to the pompous bore her father has chosen for her. But her hasty escape seems reckless now that she's estranged from her family and has no one to count on besides Christian. Turning the luckless lord into a catch has another unplanned consequence for Sarah: Has he run away with her heart?

As with the earlier books in her Playful Brides series, Valerie Bowman once again has created an enjoyable, feel-good story with engaging characters, witty banter, heartfelt emotion, playful humor and a sigh-worthy happy ending.

Sarah and Christian first meet when he discovers her in his Scotland hunting cottage. She's run from an unwanted betrothal engineered by her father and ends up snowbound with Christian. He quickly realizes that Sarah is unlike any other society miss he's met (she cooks, knits, is kind, and not the least bit spoiled or entitled). Also, as the belle of the current season, she's the perfect person to help transform him into a man who will be able to attract a bride. He hasn't had much luck on his own. He always seems to end up the best friend, never the lover.

By the time the weather improves enough for them to leave the cottage, a few things have happened. Sarah has taught Christian how to make himself more attractive to society ladies, they have become friends, and Sarah is having second thoughts about disobeying her parents. With the assistance of Christian's influential friends, the two go their separate ways and Sarah is returned to London without damage to her reputation yet neither of them can't quite forget the other. When Christian finally returns to London, Sarah is still betrothed to a man she can't bear to be near (the thought of him touching her keeps her on the verge of a panic attack) yet she doesn't have the courage to defy society and her parents a second time. The more Christian and Sarah are together, the more their feelings deepen but he can't bring himself to be vulnerable enough to tell her how he really feels about her and she can't see any way out of marrying the man chosen by her parents. Will they ever find a way to be together?

I love the slow build of this story and how Sarah and Christian become friends first before acknowledging the growing romantic feelings they have for one another. The secondary cast is a delight, especially the heroines from previous Playful Brides books who are determined to see their dear friend, Christian finally find his happy ending. There's also Sarah's brother who I do hope we'll be seeing more of in a future book.

The Legendary Lord is the sixth book in Bowman's Playful Brides series but can easily be read as a standalone. However, by the time you finish, you'll probably be so captivated by the heroes and heroines from previous books who have prominent roles in Christian and Sarah's story that you'll want to download their books immediately.

Do you have a favorite Playful Brides book?

Do you enjoy snowbound romances as much as I do?

Two randomly chosen people leaving comments will each receive a print copy of The Legendary Lord.
(US only) Deadline to enter giveaway is 11:00 pm, November 8, 2016.


Excerpt from The Legendary Lord

Copyright © 2016 by Valerie Bowman and reprinted by permission of St. Martin’s Paperbacks.