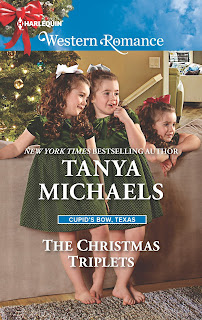 Megan Rivers moved to Cupid’s Bow, Texas, because she wanted a new life for herself and her two-year-old triplet daughters after divorcing her cheating husband. A year later, she is still getting to know people in the small town and struggling to find a moment for herself between the demands of her job as a florist and her responsibilities as mom to three active three-year-olds: outgoing Daisy, focused Iris, and shy Lily. The hunky firefighter who lives next door is her candidate for the greatest heartbreaker in town. She has little tolerance for his hectic social life, which seems to feature flavor-of-the-week dates.

Will Trent is accustomed to women responding to his charm, and he’s puzzled but not unduly concerned by his neighbor’s hostility. Having spent half his life being faithful to one love, he has taken his father’s advice and is enjoying variety in his dating life since his fiancée dumped him twenty-four hours before their wedding. Still, he’s a good guy who enjoys a close relationship with his two brothers and the trust of his friends. One of those friends, a young woman with an infant son and a bad-news boyfriend, trusts him enough to leave her baby with him when she enters a rehab facility to get clean so that she can be a better mother. When Will is faced with a screaming baby boy and no idea how to quiet him, who better to turn to for help than the experienced mother of three?

Megan may not like Will, but she cannot resist young Tommy. It doesn’t take long for her to discover that Will is quite different from the playboy she imagined him to be. Not only is he doing his best for Tommy, but he also bonds with her girls, even demonstrating his ability to tell them apart. But Megan is leery of giving her heart to a man who was clearly enjoying his bachelorhood before Tommy and will presumably eagerly reclaim his freedom when Tommy’s mother returns. Can Will convince Megan that he is ready for a long-term commitment to her and her girls?

I have enjoyed many of Tanya Michaels’s stories, and I am a soft touch when it comes to Christmas stories with kids. Thus, I began this novel expecting it to be a sweet holiday reading experience, and it met my expectations. Megan and Will are likeable characters, good people with hearts a bit battered but still generous and giving. Daisy, Iris, and Lily are real kids. Each is a distinct personality, and they share a high adorability quotient without becoming too perfect and precious. Tommy is as heart-stealing and demanding as a baby should be. Will’s family adds an extra layer of warmth. And the Christmas scenes are genuine with sentiment that avoids slipping into treacly sentimentality.

Michaels also does an excellent job of balancing kid-appeal and feel-good family making with romance. I believed in Megan and Will's forever. This is the third book in the series, but it can be read as a standalone. I had no difficulty with it even though I had not read the first two books. I do warn you that I liked the secondary characters so much that I bought Falling for the Sheriff and Falling for the Rancher after reading The Christmas Triplets, and I am looking forward to a book for Will’s younger brother Jase.  Some readers don’t like children in romance fiction. If you fall in that group, clearly this book is not for you. On the other hand, if you like kids and Christmas and romance rich with sweetness and believability, I think you will be as charmed by this book as I was.