Review - - Cowboy, It's Cold Outside 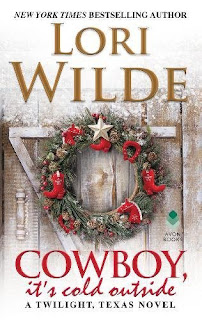 Paige MacGregor has a job to do: keep everyone out of the building until it’s time for the charity event. Dressed as she is in an elf outfit, looking every bit of a Santa Baby, it’s no wonder the big handsome male who keeps insisting he’s allowed in won’t take her seriously. Oh, the things one does when one must pay off the bills your slimy ex ran up in your name. How was she to know that Mr. Cocky Cowboy is actually the main-star attraction for said charity event?

Cash Colton has spent the last year in Peru nursing a broken heart after a very public breakup with his band, as his fiancé (who he sang with) hooked up with his best friend (the other member of the band). He is by no means looking for love...anywhere, let alone in this teeny tiny town in Texas. He is here to do a favor for a friend and maybe spend some time among people so he doesn’t feel so lonely. He does hope to keep a low profile--after all, with his love life as tabloid fodder for the last year, he isn’t keen to be immediately recognized and mobbed--but the cute and sassy Santa Baby doesn’t seem to recognize him at all. How novel.

Once Paige figures out who she actually banned from the building, she is quick to apologize, but she is no more interested in going out with the charming cowboy than she was before. (Ignoring the fact that every time she’s in his presence her heart beats faster and her Spandex nearly melts off.) She’s had enough charm for a lifetime. Still, there is something compelling about the cowboy with the hurt and longing in his eyes; and he’s certainly determined to spend time around her. I mean, could it hurt to have a no strings attached Christmas fling?

Every time Cash is with her, words come back to him. After a horrible drought in his songwriting, being with Paige has renewed his fraught relationship with his muse. He’s ready to step out in the stoplight again, move on, and sing a new song--and not necessarily one that suggests he’s still hung up on his ex. How else can he keep his muse going when it seems Paige is the divining rod who centers his muse? Could there be a possibility of a real relationship? How would it work?

But things get complicated. Paige isn’t keen to have a real relationship with a man who is in the spotlight, and certainly not when her bad penny ex might show up and cause more trouble; and Cash knows love is not for him. After all, his mother told him when he was a boy that he would only be successful so long as he kept his heart untangled. However, stubborn hearts in Twilight never hold out for long, and eventually Paige allows her cowboy to come in out of the cold.

For fans of Lori Wilde and her Twilight series, this is a comfortable sexy read to get you in the mood for Christmas. For those who have not invested in the series, readers might be a little frustrated by some of the motivations of Cash--and even Paige, but the characters around them are so compelling and likable, you buy into the romance.