Review - - A Family for Christmas 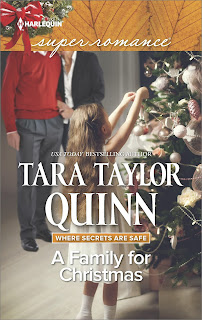 Quinn gives fans another story centered around The Lemonade Stand, a women’s shelter in Santa Raquel, California. This thirteenth novel in the long-running series focuses on two love stories, connected but taking place many miles apart.

Dr. Simon Walsh, a top pediatric thoracic surgeon in Los Angeles, suffered damage to an optic nerve in a vicious attack. His doctors have told him that it will be six months to a year before the full extent of the damage is clear. He chooses to leave LA and retreat to an isolated cabin in Prospector, Nevada, while he waits to learn if his injury will mean the end of his career. When he stumbles across the body of a badly beaten woman, he feels compelled to help her, but she will accept his help only if he agrees not to report her injuries.

The woman, who identifies herself only as Cara, is not certain she wants to survive. Abused physically and emotionally by her husband for years, she has endured out of love for her daughter. Now she believes her daughter is dead, and life has lost its purpose. Slowly, under Simon’s care, Cara’s physical wounds heal, and Simon’s gentleness and generosity begin the healing process for her battered spirit as well. When news comes that Joy is alive, Cara dares to hope for a new life.

Meanwhile, in Santa Raquel, Edward Mantle struggles to connect with seven-year-old Joy, the traumatized granddaughter he has only recently met. At the same time, he is monitoring the search for his estranged daughter Cara who is missing. Authorities fear she has been killed by her husband Shawn Amos, who has been charged with beating his sister to death. Edward finds strength in his friendship with Lila McDaniels, managing director of The Lemonade Stand. Lila yearns to help Edward, but she cannot allow her feelings for him to move beyond friendship. She is convinced that an event in her past makes her unworthy of love.

Christmas is a season for forgiveness, reconciliation, and miracles wrought by love. Will it be the season that all these troubled souls find wholeness and family again?

This story is closely connected to For Joy’s Sake, the book that immediately precedes it. Although A Family for Christmas can be read as a standalone, readers whose hearts were wrenched by Joy’s plight in the earlier book will be particularly interested in this one. It is a dark book filled with deeply wounded characters. The darkness is somehow deeper because the wounds were inflicted, some deliberately and some through misunderstanding, by those who should have been sources of love and support. It is easy to feel liking and sympathy for these characters, but some readers may find it a stretch to believe that all their problems can be so simply resolved. Others will accept that in a romance—and a Christmas romance, at that—the unbelievable can happen.