Review - - The Way to London 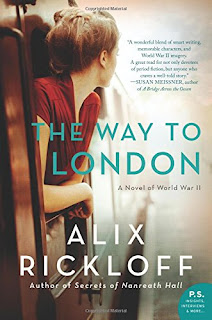 Exiled spoiled socialite, Lucy Stanhope, sent back to England to live with her aunt, is dealing with her grief and new circumstances as she usually does: by running away and causing a circus in her wake, all while proclaiming she is doing exactly what she wants, as she always has. Faced with the grim reality that the horrors of World War II have left even her an orphan, Lucy wants to start over somewhere else, somewhere that doesn’t remind her of her mother. Hollywood, preferably. And the ticket to Hollywood lies in Mason Oliver, who happens to be in London for a few days before he returns home to L.A. Come hell or high water, Lucy is going to get to Mason and prove she is the actress he’s looking for--and she’ll do it while returning a young boy--and proven sidekick--Bill back to his mom.

But the road to London does not run smooth, certainly not during a war where the planes come nightly to bomb everything. And keeping an eye on one measly twelve-year-old turns out to be more challenging than she imagined. Worst, she has to call in help from one of the last people she wants to see, a former soldier and acquaintance, Corporal Michael McKeegan, one of the most truly decent people she’s ever met and one who seems to take her rudeness and sarcasm in stride. And one who seems determined to make her confront the things she doesn’t want to think about at all: her mother, family, and where she belongs.

I’ll be honest--it’s difficult to like Lucy. It becomes clear that Lucy doesn’t even like Lucy; and her behavior in contrast to the honorable and kind Michael makes you want to shake her more often than naught. But her tender behavior with Bill, the boy she is escorting to London on her lark to meet up with the movie director, shows the reader there is more to Lucy than meets the eye. And Michael shows a bit of a temper as well--so even guardian angels have ruffled feathers. At the same time, you get why Lucy behaves as she does. Her mother is literally the worst. Rabid wolves are kinder mothers, and Lucy reeks of a childhood in which she had to constantly compete for attention and failed. So as much as it was hard to like Lucy’s character, I found myself crying for her at the end...and for Bill...and for Michael, and very happy when things turned a corner to a happy ending had by all.

The people you meet on the way to London are wonderful--a score of other mothers (all better than Lucy’s) will make you laugh and cry and marvel at the steely strength of the women (and men) who lived through the Blitz. The shenanigans Bill gets up are enough to turn your hair gray, and it’s no wonder the lad was sent out to live in the country during the war if this was what he was like when he was living in London. Smoking, drinking, gambling, conning, faking illnesses, running away--honestly. Dickens couldn’t have written a wilier and sweeter young charmer. And then there is Michael. Oh, the odes I could write about that man. You’ll spend most of the book, I’m sure, thinking he doesn’t deserve to be saddled with a girl as ungrateful as Lucy--but then...well...you can’t imagine him with anyone else. Not even the love of his life he was pining for when he was living back home.


The writer’s voice--and Lucy’s--was vivid, well-paced, and rich with detail. I enjoy World War II era novels, and I always feel I learn something new about that time in London when I read them. I look forward to reading other books by this author--hopefully also in the WWII era. If, like me, you tend to judge heroines more harshly--and avoid books where the heroines are ‘unlikeable’ for stretches of time, I hear you. For the longest time while reading it, this book was a solid 3 for me, and this whole quest of getting to London got a little...long while she was behaving this way, but I have to say, it all adds up. As in, I don’t think I would have cried as much or been as happy with the ending if the author hadn’t taken us on this journey as Lucy learns what it means to be without a mother, but to finally realize what it means to have a real family and real belonging.
Posted by pjpuppymom at 12:30 AM