Karyn Gerrard has been a regular here at The Romance Dish since we opened the doors back in 2009. It's been fun to watch her journey over the years from enthusiastic romance reader to published romance author. Today, I'm excited to reveal the beautiful cover of Karyn's next book, Marriage with a Proper Stranger, the first in her new Men of Wollstonecraft Hall historical romance series!

I'm a fan of the marriage of convenience trope so, of course, I'm looking forward to this book.

I'm also intrigued by the prospect of a beta, schoolmaster hero. I don't believe I've read one before. Have you? 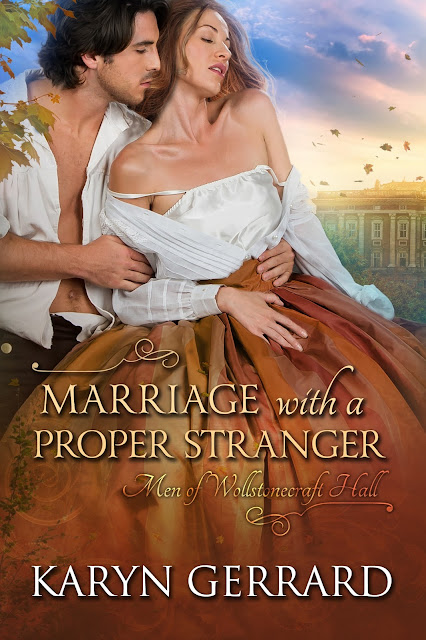 “Build a wall about your heart.”

Riordan Wollstonecraft labors under the heavy burden of his forebears. For generations, a curse has followed the dashing young men of his family, guaranteeing the women they love an untimely death.  The youngest grandson of the Earl of Wollstonecraft Hall, charismatic Riordan is quietly resigned to his fate, an educator who devotes his life to good works, and ignores any longing for something more . . .

Widowed and penniless, Lady Sabrina Lakeside is desperate to avoid a second forced betrothal—this time to an aged marquess. Her chance encounter with Riordan leads her to an impulsive offer: a temporary marriage of convenience that could benefit them both. His agreement is as surprising as it is welcome. Before long, Riordan’s keen intellect and kind words have Sabrina rethinking her plans of a union in name only. But her new husband is holding something back. Will giving in to their tantalizing passion lead her only to further heartache . . . or could it be the first step toward healing them both?

“What have we here?” Mr. Black asked, his blue eyes twinkling with amusement.
“Luncheon. Please. Open it and help yourself.”
Mr. Black got to his feet, picked up a nearby chair, and carried it to the front of his desk. “Have a seat, my lady.”
As she made herself comfortable, Mr. Black unpacked the lunch. “Cold salmon sandwiches. A rare treat. Cheese, biscuits, sliced strawberries.” He held up a jar. “And lemonade. Shall I serve?”
Sabrina nodded, and Mr. Black quickly loaded food onto the stoneware plates, passing one to her along with a paper napkin. He took his seat, bit into the sandwich and smiled. “Very tasty.”
“I believe Mrs. Kempson adds dill weed to the salmon mixture. There are four dozen ginger biscuits for the children. For teatime this afternoon.”
“No teatime, I’m afraid. The children work until five.” Mr. Black finished his sandwich and reached for another wedge. Goodness, she should have brought more food.
“There should be a break, at least in my opinion, to rest or play for ten minutes. Or have a biscuit. Or an apple.” Sabrina pointed to the basket of fruit by his desk. “Do you provide them yourself or does this board you spoke of?”
“I paid for this, but am hoping it will become part of the budget. Many of the children have little enough to eat, and an apple can provide many needed nutrients.” He poured them glasses of lemonade. “I must say I like your idea of a break. Ten minutes. It would be a recess from learning, to allow for play or quiet time or to eat a ginger biscuit. Thank you for bringing them.”
His words were cordially spoken and despite her determination not to react to this man, her cheeks flushed. “Now that we’re settled in, what do you wish to discuss with me?” he asked.
Lord, where to begin? Finishing her sandwich, she dabbed the corners of her mouth and laid the napkin on the plate. “I recently came out of mourning. My late husband, the earl, did not provide for me in his will. His heir and nephew tossed me out and I had no choice but to return to my father.”
Mr. Black frowned. “I am sorry this happened to you. It’s a travesty women do not have any rights whether inside of marriage or out.”
“No, we do not. None at all. My hateful father no longer wishes to provide for me as he has his own plans to remarry. To paraphrase, he does not wish his widowed, ancient daughter lurking about the house.”
Mr. Black’s mouth quirked with amusement. “You’re hardly doddering, my lady.”
“According to Society, I am. I’m thirty years of age. My father believes I’m only fit for old men. Pepperdon was more than thirty-five years older. I will not be forced into such a union again.” Sabrina exhaled. She had come this far. Might as well lay it all out. “The baron has given me an ultimatum. Marry another prehistoric peer or I will be left to find my own way in the world.”
Mr. Black’s friendly smile turned into a frown. “Damn. Pardon, my lady. I am sorry to hear this.”
“Good. Then you can aid me by marrying me. Right away.” 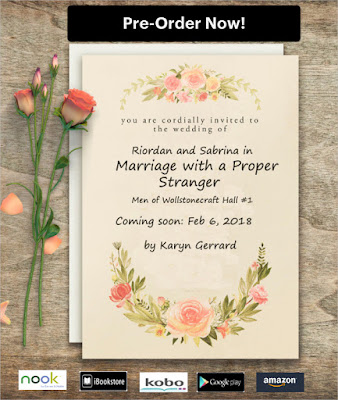 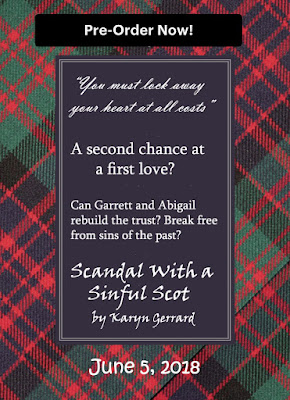 “You must lock away your heart at all costs.”

Falling in love was the darkest moment of Garrett Wollstonecraft’s privileged youth, even as he and Abigail Hughes shared a blissful summer of passionate promise. Sworn to keep Abigail safe from the curse plaguing generations of Wollstonecraft men, Garrett sacrificed his future happiness. Now, fourteen years after he lost his heart, Abigail reenters his life. But the woman who arrives unannounced at his ancestral manor is very different from the sheltered girl Garrett once knew.

The widow of a country doctor, Abigail can’t forgive Garrett for his cruel rejection. Yet she can no longer keep the truth from him—a secret that could have resulted in her ruin. But as the embers of desire reignite, and Abigail and Garrett slowly rebuild trust, a malicious enemy plots against them. Is their love strong enough to break free from the sins of the past—and to end the tragic cycle that consigns Garrett to a life of loneliness?

Karyn Gerrard, born and raised in the Maritime Provinces of Eastern Canada, now makes her home in a small town in Northwestern Ontario. When she’s not cheering on the Red Sox or travelling in the summer with her teacher husband, she writes, reads romance, and drinks copious amounts of Earl Grey tea.

Even at a young age Karyn’s storytelling skills were apparent, thrilling her fellow Girl Guides with off-the-cuff horror stories around the campfire. A multi-published author, she loves to write sensual historical and contemporaries. Tortured heroes are an absolute must.

As long as she can avoid being hit by a runaway moose in her wilderness paradise she assumes everything is golden. Karyn’s been happily married for a long time to her own hero. His encouragement and loving support keeps her moving forward.