The Good, the Bad, and the Duke
By Janna MacGregor
The Cavensham Heiresses - Book 4
Publisher: St. Martin's
Release Date: November 27, 2018
Reviewed by PJ 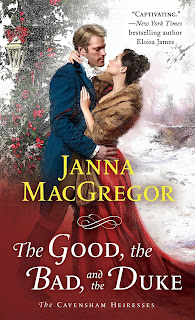 Lady Daphne Hallworth is ready to celebrate the holidays with her family. But when they accidentally leave her home alone, Daphne uses the time to work on her dream—opening a home for unwed mothers. But her quest isn’t problem-free: She’s in a battle to win the property for the home against her brother’s best friend-turned-enemy, Paul Barstowe, Duke of Southart. And that’s not all: someone has stolen her personal diary, which holds secrets that could devastate her family. Daphne has always harbored private feelings for the man her family scorns…though perhaps striking a bargain with the handsome Duke will solve both their problems?
Paul, long considered good for nothing, aims to open a hospital to honor his brother and restore his reputation. So when a conflict over the land brings him straight into Daphne’s life, they make a deal: He will help her find her diary if Daphne can change her family’s opinion of him. But before he can win her family’s affection, he has to win hers first. Maybe love was the answer to their family feud all along?

When I read The Bad Luck Bride, the first book in Janna MacGregor's The Cavensham Heiresses series, I was not inclined to be sympathetic to the secondary, villainous character of Paul Barstowe, former best friend of the book's hero. In book two, The Bride Who Got Lucky, there were glimmers of a better man - or at least the possibility of one - hidden deep inside and I began to wonder if there could be more to Paul than I had first believed. I queried the author and learned that the fourth book of the series would be Paul's journey to redemption and love. The Good, the Bad, and the Duke releases today and, as I suspected, there is indeed much more to this man than his previous behavior would have indicated. Not only did Daphne fall in love with him but I did too. In fact, not since Lisa Kleypas's Sebastian, Lord St. Vincent have I enjoyed a redeemed hero this much.

Who better to match with a formerly dissolute, currently striving for redemption hero than his ex-best friend and current enemy's younger sister, right? As much as I enjoyed Paul, his heroine, Daphne is equally as wonderful. It was pure pleasure to watch her recapture the sense of self and adventurous spirit that she'd kept firmly on the shelf since the death of her sister and see her go to toe-to-toe both with her family over her relationship with Paul as well as with Paul himself. I adored these two together. The banter between them sparkles, their chemistry is off the charts, his tenderness with her is sigh-worthy, her defense of him is cheer-worthy, and the bond formed in their youth, while stretched to its limits by Paul's actions and Daphne's brother's enmity, remains strong and unbroken - a solid foundation upon which to build a love for a lifetime. Their beautifully paced evolution as a couple, as well as individually, engaged both my mind and my heart and put me firmly in their HEA corner.

The Good, the Bad, and the Duke is not only my favorite book in Janna MacGregor's The Cavensham Heiresses series but also one of my favorite books of 2018. It has my enthusiastic recommendation.