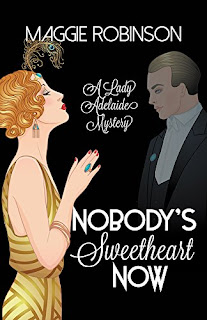 A delightful English cozy series begins in August 1924. Lady Adelaide Compton has recently (and satisfactorily) interred her husband, Major Rupert Charles Cressleigh Compton, hero of the Somme, in the family vault in the village churchyard.


Rupert died by smashing his Hispano-Suiza on a Cotswold country road while carrying a French mademoiselle in the passenger seat. With the house now Addie's, needed improvements in hand, and a weekend house party underway, how inconvenient of Rupert to turn up! Not in the flesh, but in - actually, as a - spirit. Rupert has to perform a few good deeds before becoming welcomed to heaven - or, more likely, thinks Addie, to hell.


Before Addie can convince herself she's not completely lost her mind, a murder disrupts her careful seating arrangement. Which of her twelve houseguests is a killer? Her mother, the formidable Dowager Marchioness of Broughton? Her sister Cecilia, the born-again vegetarian? Her childhood friend and potential lover, Lord Lucas Waring? Rupert has a solid alibi as a ghost and an urge to detect.


Enter Inspector Devenand Hunter from the Yard, an Anglo-Indian who is not going to let some barmy society beauty witnessed talking to herself derail his investigation. Something very peculiar is afoot at Compton Court and he's going to get to the bottom of it - or go as mad as its mistress trying.

This book is so much fun, which seems a weirdly odd thing to say about a murder mystery. Nevertheless, it's true. For her first foray into English cozy mysteries, Maggie Robinson has hit it out of the park - or whatever the English equivalent would be - with this expertly crafted whodunit. From beginning to end, it's an absolute delight.

With impeccable timing, and wit, Robinson guides somewhat naive Addie as she explores her newly acquired independence, so rudely interrupted by her dead husband's ghostly presence, as dead bodies keep turning up during her house party. The story flows beautifully with perfectly placed twists and turns to keep the reader guessing as to the identity of the killer or killers. There are several plausible suspects and Robinson drops clue crumbs here and there, keeping me - and everyone at her house party - wondering. All of the characters, primary and secondary, are well developed and contribute to the progression of the story in some way. Dev, the Scotland Yard Inspector, in particular, is one I hope we'll be seeing more of in future books. He and Addie have chemistry stirring between them that I'd love to see explored. Rupert, less than exemplary in life, shows great promise in death. The scenes between him and Addie are rife with humor and also a bit poignant. I don't know if he'll continue to be present in future books but I hope so.

If you're in the mood for a roaring-twenties cozy mystery set in the bucolic English countryside with sparkling wit and banter, a well-crafted mystery, a likable protagonist, a charming, but meddlesome, ghost, a handsome inspector, and a house filled with potential murderers (could it be the school chum in the library with a candlestick?), then Maggie Robinson's Nobody's Sweetheart Now is just the book for you. It has my enthusiastic recommendation.


Welcome back, Maggie! I’m so excited to celebrate the release of Nobody’s Sweetheart Now, the first book in your English cozy mystery series. What a fun story! Please tell our readers what they can expect from this new series.

Well, I’m trying to conquer a new decade and a new genre, the 1920s classic mystery…with a touch of the paranormal. The book comes out next week, on November 13. I’ve written historical romances set in the Regency, Victorian and Edwardian eras, but I challenged myself to try something a little different. I’ve had more fun than should be legal. My heroine, Lady Adelaide Compton, is a widowed marquess’ daughter. She thought she was rid of her unfaithful husband Rupert, but finds out to her shock he hasn’t quite left this astral plane. He has to make up for his many sins before he can go in a heavenly direction, and discovers his talent for detection. A real detective inspector from Scotland Yard, Devenand Hunter, has no idea he’s being assisted by a ghost!

How many books are planned for the series?

The second, Who’s Sorry Now?, comes out next May, and I’m halfway done with the third, tentatively titled Make Believe. The book titles come from popular songs—it was a fabulous decade for timeless music, and there are a lot of songs! I’d like to write them to infinity…but all those bodies building up might give me pause, LOL. I never realized how enjoyable it is to kill characters rather than make them kiss.

Nobody’s Sweetheart Now is set in 1924 England, a time and place that I find fascinating. What is it about this era that inspired you to set your series there?

When I was in high school, I dressed as a flapper for a youth fellowship musical, and Charlestoned the night away—the seed was planted! The twenties were years of wild extremes, which provide lots of plot bunnies. I chose England, specifically the Cotswolds and London, since I’ve been a frequent visitor. I’m trying to follow in the footsteps of those Golden Age of Mystery authors, who were my first reading loves.
The aftermath of the Great War was particularly poignant; a whole generation of young men never returned. My antihero Rupert was a flying ace who became bored by peace time, and is even more bored by death!

I love the vintage autos and fashion described in this book. Please tell us about the car you’d be driving and clothes you’d be wearing if you could time-travel to the 1924 English countryside for a day. With money being no object, of course.

I just so happen to have a Pinterest board which brings me great pleasure and inspiration. Here’s the link: https://www.pinterest.com/maginme/lady-adelaide-series/ so you all can drool too! If my arms were not so flabby, I’d be wearing a sleeveless, sequined flower-embroidered teal silk crepe dress with as many diamonds and aquamarines as I could slap on. I would be chauffeured in a Bentley Landaulet, of course.

Will Addie be helping to solve cases on both sides of the pond?

In the second book, she’s just returned from America, where no one she knew was knocked off during her visit. I think I’ll keep killing off British people so Dev and Scotland Yard can get involved.

What was your favorite scene to write in this book?

For a while, poor Addie thinks she’s losing her mind every time Rupert turns up. Here’s the first page of Chapter 14:

“What are you doing snooping around?” Addie hissed into the bushes.
“Not snooping. Until fairly recently, I was the lord of this manor. Let’s just say I was surveying the property. And checking up on your welfare, too. You were unchaperoned. I don’t trust that foreign fellow.” Rupert stepped out from behind the hedge and brushed his suit off. For something that he’d worn now for six months under unusual conditions, it was holding up well.
“For heaven’s sake—not that you’d know anything about that—Mr. Hunter is not foreign! He was born in Chelsea.”
“Details. Nevertheless, that Sergeant Bob Whosis should have been there looking like an earnest bulldog, scribbling away. Or your maid Beckett, if you could convince her to get her nose out of Movie Weekly long enough. ”
“You pressed your nose against the glass, crossed your eyes and waggled your tongue at me while I was talking to him!”
“See? I don’t understand how you could call that snooping. Snooping requires stealth. Tip-toeing. Near invisibility. There I was, plain as day.”
Rupert always had an answer to everything. Addie wanted to slap him, but reminded herself he wasn’t really there.
Or was he? Could it be possible that she was really, truly being haunted by the ghost of her husband?

Hot tea or hot chocolate?
Hot tea. With too much sugar and a slice of lemon.

Dresses or jeans?
Yoga pants, though I don’t do yoga!

Christmas decorations before or after Thanksgiving?

While the kids and grandkids are home, we drag the tree and decorations up on Thanksgiving Day evening, then spend Friday puttering around. The tree is pre-lit, so there are no tangled strings of lights or cursing involved. The grandkids hang all their favorites in a bunch on basically one branch, and then when they’re gone, I redistribute them more evenly. I am a bad grandmother.

Ghosts: Yes or No?

Rupert seems pretty real to me now, LOL. I can’t rule them out.

Thanks, Maggie! Do you have anything you'd like to ask my readers today?

I’m going to turn your last question around—has anybody had a ghostly encounter or odd feeling in an old house or a woo-woo Ouija board experience?

I’ll give away a signed hardcover book of Nobody’s Sweetheart Now to a random commenter even if you say no!