Unmask Me If You Can
By Shana Galen
The Survivors Series - Book 4
Published by: Shana Galen
Release Date: November 6, 2018
Reviewed by PJ 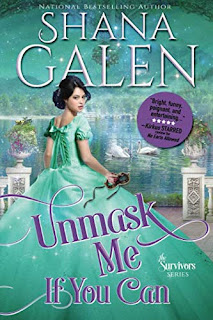 This masked lord... Lord Jasper, younger son of a marquess, suffered horrible burns fighting in the Napoleonic Wars. He wears a mask to hide his face from the stares and screams and finds comfort in the shadows. Jasper is an exceptional bounty hunter, so when a woman summons him to her deathbed and asks him to find her runaway daughter before she passes away, he doesn't refuse. Jasper is close to his quarry when he's knifed by an assailant. Imagine his surprise when he regains consciousness in the arms of the woman he seeks. Except she's not at all what he expected.Is not the only one with scars.On a remote cliff on the sea, Olivia Carlisle calls her five-year-old son in from an approaching storm. But the little boy is more interested in the man he's found on the trail to their hidden cottage. Olivia fears men and wants nothing more than to leave the injured man where she found him. But his knife wound is severe, and with the approaching storm, she knows leaving him will condemn him to death. As Jasper begins to heal, Olivia acknowledges her attraction to him, even though such emotions terrify her almost as much as returning to London. Jasper must convince her that her only chance at safety is to challenge the man who pursues her. They must travel into the lion's den—he to face his vulnerability and she to face her worst fears.

I've enjoyed all of the books in Galen's The Survivors series but Jasper and Olivia's story is my favorite. They both carry deep emotional trauma that has led them to hide from others. For Olivia, it meant running away from everything and everyone she knew while Jasper hides his burns beneath a silk mask and his emotional vulnerability even deeper. I liked that the first half of the book takes place in Olivia's secluded cliff-side cottage with the only human interaction between Jasper, Olivia, and her five-year-old son, Richard. It gives this wary couple the necessary time and seclusion to let down their guards enough to become friends, and possibly more, before they have to face the challenges that await in London. I admired Olivia's strength, the tough decisions she made to protect her son and herself, her determination to take back control of her life once the decision to finally confront her attacker is made, and to fight for both happiness and love. I appreciated Jasper's patience and care in light of Olivia's fears, his gentleness with both her and Richard, and his determination to protect them at any cost to himself. These three belong together and I was cheering them on the entire way.

Speaking of Richard, I love that kid! He's an energetic, inquisitive, scene-stealing, heart-grabbing sweetheart. Many of his scenes are infused with humor (he is a five-year-old boy, after all) but there are some between Richard and Jasper that are so tender and poignant I was almost brought to tears. Theirs is a love story of a different kind and it captured my heart just as surely as the love between Jasper and Olivia.

There are nine more books planned for Shana Galen's The Survivors series. Based on the quality of the first four, I need to make more room on my keeper shelves!


I recently had the opportunity to interview Shana Galen. I hope you enjoy our Q&A below. Don't miss the giveaway at the end!

Welcome to The Romance Dish, Shana! Unmask Me If You Can is your fourth Survivors story. How many more books are planned for this series?

Initially, I’d planned 12 books, but then I realized I had to write a book for Benedict, the leader of the troop. So there are 13 planned now—9 to go!

What can you share about the next book and when do you expect it to be published?

The next book is about Benedict Draven, the leader of the Survivors (aka Draven’s Dozen). At the start of the war, he saved a young woman by marrying her in a Catholic ceremony he considers completely illegal. He didn’t expect to ever see her again. The Claiming of the Shrew is what happens when Catarina shows up in London after the war, wanting an annulment so she can marry another man. It will be out in April 2019.

I'm already eagerly anticipating Draven and Catarina's story based on their brief interaction in Unmask Me if you Can!

I have loved the characters in this series. Will we have an opportunity to catch up with any/all of the couples before the series comes to an end?

That’s going to be a lot of couples! I don’t know that I could do that in a book and still have it focus on the main characters. Maybe I’ll do an epilogue like I did for the Jewels of the Ton series.

What was your favorite scene to write in this book? What was the most difficult?

My favorite scenes to write were those with Jasper and Richard, the heroine’s 5-year-old son. Jasper wears a mask and avoids kids, who are generally afraid of him. He doesn’t know what to do with this kid, who thinks scars are cool and asks all those questions we adults aren’t quite sure how to answer.

The most difficult to write were the intimate scenes with Jasper and Olivia. They’ve both faced so much trauma, and I really wanted to respect that and also show that love can overcome anything.

I’m currently enjoying the crisp, clear days, cool nights, and hearty soups and stews of fall, not to mention the football. I love football! What’s your favorite season? What makes it so? Is there a favorite food or activity that reminds you of it?

My favorite season is spring. I love the warm (but not too warm) weather, the flowers blooming, the baby animals, and dining al fresco. I always feel like it’s really spring when all the St. Patrick’s Day activities kick off. My daughter does Irish dancing, so we do a lot of parades and shows around St. Pat’s.

Let's do a fast five!

Christmas decorations before or after Thanksgiving? After, of course

Thanks so much for visiting with us, Shana. Do you have anything else to add? Would you like to ask my readers a question?

Readers, I’m about to start having my cover designer work on the cover for The Claiming of the Shrew. All the series covers feature women in beautiful dresses. What color should Catarina’s dress be? (PJ, jumping in to add that the colors of the dresses on the first four covers have been pink, light blue, peach, and mint green.)

One randomly chosen person leaving a comment before 11:00 PM, November 14 will receive their choice of one of the following books: Third Son's a Charm, No Earls Allowed, or An Affair with a Spare. (print or digital; open internationally)

Email ThisBlogThis!Share to TwitterShare to FacebookShare to Pinterest
Labels: 4.5 Star Review, Giveaway, Historical Romance, PJ, Shana Galen, The Survivors, Unmask Me If You Can