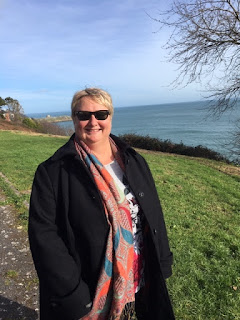 It's that time of month again! Anna Campbell is back for episode three of her exciting four month journey. So far, we've enjoyed the beauty of Italy and Ireland. I can't wait to discover what's next. I don't know about you but after tagging along with Anna via her words and photos, I'm ready to book a trip across the pond right now. Welcome back, Anna!

So where has our intrepid heroine been over the last month? The sad, but true answer is that she’s mainly been poring over printouts or her computer as she got the final version of The Highlander’s Lost Lady ready for its release. On the upside, she’s had her head down in very picturesque places! 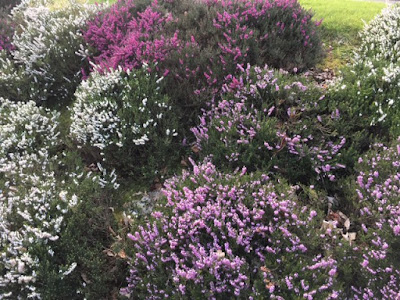 Let’s start with a show and tell for the historical romance fans out there. When I was in Ireland at the Tyrone Guthrie Centre, I took this picture of heather. In Scottish-set historicals, you’ll often see a description of hills covered in heather. This lovely flower is what they’re talking about.
I finished up my month-long stay at the TGC at the beginning of April. If you read last month’s post (http://www.theromancedish.com/2019/03/on-road-with-anna-campbell-2019-episode.html), you’ll know I was having a lovely time writing at a beautiful country estate in Ireland. I’m including some pictures of the lake at the bottom of the garden at different times of day.

My next stop was a very quick visit to the Isle of Bute near Glasgow. I was there for only two nights, mainly to see the magnificent Victorian mansion Mount Stuart. Rothesay, the island’s capital, is a charming if faded Victorian resort. The UK abounds in places like this, once bustling with thousands of visitors from Britain’s industrial cities who were seeking sea air and a bit of fun. These days, most of those visitors chase the sun in places like Spain. The resorts are left with often very pretty promenades, a lot of empty shops, and large hotels that you can generally stay in for a song. This photo was taken from my room – as you can see, I had a lovely view across the old-fashioned seafront back toward the mainland. There’s a very particular, melancholy but romantic atmosphere in places like this. I always enjoy visiting them. 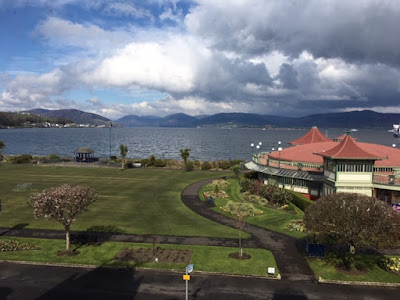 I’d finagled my way into a private tour of Mount Stuart, the magnificent Victorian mansion which was the home of the Marquis of Bute, one of the richest men in the world in the late 19th century. If possible when I go to old houses, I love to have someone showing me around because you get the stories about the families who lived there. Those stories are gold for someone writing historical romance, as you can imagine.

For all its luxury, Mount Stuart was actually quite a cozy place. Look at those pictures of the reception rooms. You can definitely imagine curling up on those sofas with a good book, can’t you? The house is a piece of fantasy – part medieval castle, part Venetian palazzo, all in beautiful grounds sloping down to the Clyde estuary. Even better, when I was there, there were 200,000 daffodils in the garden. Amazing.
The house was full of mod cons à la 1880, including under-floor heating, electric lighting, a heated swimming pool, saunas, and surround showers, not to mention a secret passage leading from the library up to the billiard room. One of the glories of the place was the extravagant stained glass. You can see some examples in the photos.

The Marquis was a devout Catholic convert so there is both a beautiful white marble chapel and a rather spooky private chapel based on the Church of the Holy Sepulchre in Jerusalem.
If you’d like to know more about Mount Stuart or even if you’re thinking of visiting (highly recommended), here’s the website: https://www.mountstuart.com/

I left Bute for the long, but spectacular trip along the Road to the Isles to the Isle of Eigg. Those of you who read last year’s On the Road posts will remember the spectacular small island just south of the Isle of Skye where I did a whole lot of writing. Well, this year I did a whole lot of editing! But the view from my B&B remains spectacular and Laig Beach just down the hill is still one of my favorite places in the world. 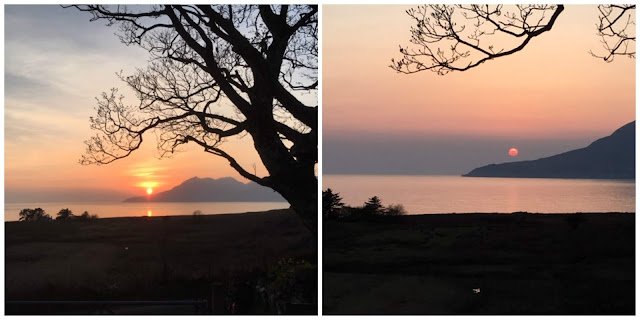 I’m going to finish up with some pictures of Rum just across the channel from Eigg in changing light. As you can see, the sunsets are A-MAZ-ING!!!

I’ve got another week here before I head over to another small island called Canna which belongs to the National Trust. Make sure you check back next month to see the photos from there. After that, I’m heading south to see some friends in England and hopefully a few more old houses. Hard to believe I’ve only got a little more than a month to go on my huge trip!
I’ve got a giveaway this month, a download of my new story THE HIGHLANDER’S LOST LADY, which is out 29th April. No geographical restrictions. Just leave a comment on this blog to be in the draw.
I’ve told you about one of my favorite places in the world. What’s yours? See you next month!
~~~~~~~~~~~~~~~~ 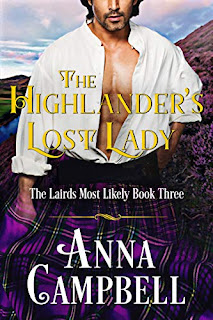 A Highlander as brave and strong as a knight of old…When Diarmid Mactavish, Laird of Invertavey, discovers a mysterious woman washed up on his land after a wild storm, he takes her in and tries to find her family. But even as forbidden dreams of sensual fulfillment torment him, he’s convinced that this beautiful lassie isn’t what she seems. And if there’s one thing Diarmid despises, it’s a liar. A mother willing to do anything to save her daughter…Widow Fiona Grant has risked everything to break free of her clan and rescue her adolescent daughter from a forced marriage. But before her quest has barely begun, disaster strikes. She escapes her brutish kinsmen, only to be shipwrecked on Mactavish territory where she falls into her enemies’ hands. For centuries, a murderous feud has raged between the Mactavishes and the Grants, so how can she trust her darkly handsome host?
Posted by pjpuppymom at 12:30 AM

Email ThisBlogThis!Share to TwitterShare to FacebookShare to Pinterest
Labels: Anna Campbell, Giveaway, On the Road with Anna Campbell, The Highlanders Lost Lady