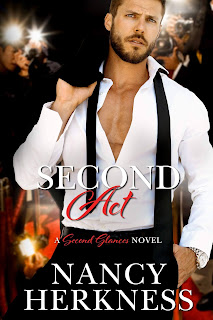 Jessica Quillen, veterinarian for the charitable K-9 Angelz program, didn’t mean to stumble into the middle of a New York movie shoot. She just wanted to rescue the stray dog she’d been chasing. Instead, she’s playing catch-up with her ex-fiancé—and the screen’s hottest action hero, Hugh Baker. The only man she ever loved. The dream that disappeared. The heartthrob who’s now hoping for a “take two.”
Seeing Jessica triggers emotions Hugh has tried to forget. Abandoned by his mother to foster care, he still struggles to feel worthy of love and to open his heart to a woman. His biggest mistake was not trusting Jessica. It was his fault she left. All he wants now is to make up for lost time. But he has to prove that she can trust him.
Though the sparks still smolder, he’s still Hollywood—a world far away from Jessica’s. Now it’s up to her to give their love story a happily ever after.

Nancy Herkness brings readers another heart-tugging story of second chances in her newest novel, Second Act. I had serious doubts that she could ever create a hero who would equal Luke Archer (The All-Star Antes Up) in my affections but dang if she hasn't done exactly that with Hugh. And then, she went and gave him a heroine in Jessica who not only earned my respect and admiration but notched her own place in my heart. I cheered so hard for these two.

When you pair a financially struggling, Harlem veterinarian with a billionaire movie star you'd think Hollywood (Hugh) would hold all the power. I love that Herkness flips the script. Hugh may have the money and connections but Jessica has the emotional strength. Hugh may be the mega-successful movie star but, deep in his core, he's still the unwanted foster kid, abandoned by the people who were supposed to love him. There are vulnerabilities in Jessica as well. Both were hurt in their past relationship, both need to open their hearts and be honest with themselves, and one another, if they have any hope of finding their happily ever after. Herkness skillfully leads them through their journey with humor, passion, forgiveness, and acceptance. I admired Jessica's dedication to her patients, to the K-9 Angelz program, and the at-risk kids she works with. I enjoyed unraveling Hugh to discover the caring heart he keeps well protected. And I adored them together. I was with them every step of their journey.

Surrounding Jessica and Hugh are a cast of well-crafted characters - both two and four legged - who add an undeniable richness, humor, and depth of emotion to the story. Readers new to this series will have no problem reading Second Act on its own but fans of the series - and the previous Wager of Hearts series - will no doubt be excited by guest appearances of prior heroes and heroines. The conversations between Hugh and Gavin (hero of The VIP Doubles Down) are especially enjoyable.

If you're looking for a contemporary second chance romance with humor, heart, and sizzle, likable characters, adorable rescue animals, and a sigh-inducing, well-deserved, HEA, I enthusiastically recommend Second Act.