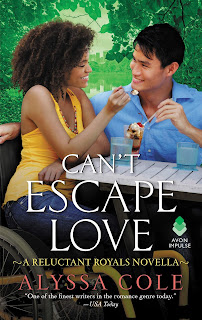 Regina Hobbs is nerdy by nature, businesswoman by nurture. She's finally taking her pop culture-centered media enterprise, Girls with Glasses, to the next level, but the stress is forcing her to face a familiar supervillain: insomnia. The only thing that helps her sleep when things get this bad is the deep, soothing voice of puzzle-obsessed live streamer Gustave Nguyen. The problem? His archive has been deleted.
Gus has been tasked with creating an escape room themed around a romance anime…except he knows nothing about romance or anime. Then mega-nerd and anime expert Reggie comes calling, and they make a trade: his voice for her knowledge. But when their online friendship has IRL chemistry, will they be able to escape love?

Brimming with originality, this novella features engaging characters I couldn't help but cheer for, a depth of emotion typically only found in full-length books, the imperfections that make all of us unique, and the joy experienced when we find that person who not only accepts but celebrates us for who we are. Reggie is a brilliant business owner, sci fi and anime geek, "good" twin, and over-achiever who also lives with an illness-induced disability that requires her to use a wheelchair - but does not define her. Gus, a former podcaster, is an emotionally challenged, super nerdy designer of escape rooms who lives on the autism spectrum and possesses a soothing voice that Reggie needs to calm enough to sleep. And I am the non-nerdy reader old enough to be their grandmother, who would be hard pressed to name a sci fi character or anime movie, who absolutely adored them.

Thus is the brilliance of Alyssa Cole's writing and her ability to fully immerse readers into the hearts, minds, and lives of her unforgettable characters and the journeys of her imagination. Begin with Can't Escape Love. Move on to the other stories in the Reluctant Royals series. I can't recommend them highly enough.

Have you read Alyssa Cole's books yet?

Have you "met" any nerdy, quirky, and adorably awkward romance characters who captured your attention and affection?

I have two giveaways today, thanks to my weekend at Avon's KissCon. (more on that later)

One person who posts a comment before 11:00 PM (Eastern), April 18 will receive a signed print copy of A Princess in Theory, the first book in Alyssa Cole's Reluctant Royals series.  (U.S. only) (read Hellie's Top Dish review) 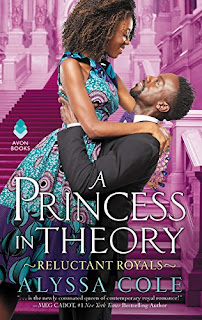 Between grad school and multiple jobs, Naledi Smith doesn’t have time for fairy tales…or patience for the constant e-mails claiming she’s betrothed to an African prince. Sure. Right. Delete! As a former foster kid, she’s learned that the only things she can depend on are herself and the scientific method, and a silly e-mail won’t convince her otherwise.
Prince Thabiso is the sole heir to the throne of Thesolo, shouldering the hopes of his parents and his people. At the top of their list? His marriage. Ever dutiful, he tracks down his missing betrothed. When Naledi mistakes the prince for a pauper, Thabiso can’t resist the chance to experience life—and love—without the burden of his crown.
The chemistry between them is instant and irresistible, and flirty friendship quickly evolves into passionate nights. But when the truth is revealed, can a princess in theory become a princess ever after?

One person who posts a comment before 11:00 PM (Eastern), April 18 will receive a signed print copy of A Prince on Paper, the third full-length book in Cole's Reluctant Royals series - which won't be released to the public until April 29!
(U.S. only) 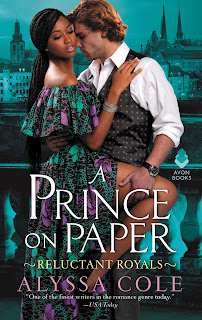 Nya Jerami fled Thesolo for the glitz and glamour of NYC but discovered that her Prince Charming only exists in her virtual dating games. When Nya returns home for a royal wedding, she accidentally finds herself up close and personal—in bed—with the real-life celebrity prince who she loves to hate.
For Johan von Braustein, the red-headed step-prince of Liechtienbourg, acting as paparazzi bait is a ruse that protects his brother—the heir to the throne—and his own heart. When a royal referendum threatens his brother’s future, a fake engagement is the perfect way to keep the cameras on him.
Nya and Johan both have good reasons to avoid love, but as desires are laid bare behind palace doors, they must decide if their fake romance will lead to a happily-ever-after.