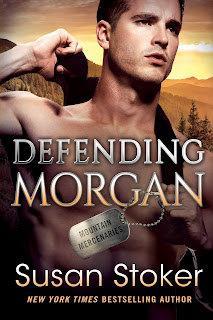 Dispatched to the Dominican Republic to rescue a kidnapped child, former Navy SEAL Archer “Arrow” Kane makes a startling discovery: another hostage—Morgan Byrd, a very beautiful and very well-known missing person who disappeared off the streets of Atlanta a year ago. She’s brave, resilient, and unbroken. All Arrow wants to know is why she ended up in a shack in Santo Domingo. All he feels is the desire to protect.

Morgan is done being the victim and is determined to find out who hates her so much that they want her gone—but not dead. Until then, she has Arrow, an alpha stranger who’s offering a warm and safe place to hide. But as the passion between them flares, so does the fear that whoever took Morgan will do anything to get her back. For Arrow, protecting this woman with a mysterious enemy is the most dangerous mission of his life. And it’s worth every beat of his heart.

Susan Stoker is fast becoming one of my favorite romantic suspense authors and Mountain Mercenaries, one of my favorite series. Defending Morgan, an action-packed, deeply emotional story of survival and recovery following emotional and physical trauma, is another outstanding addition to the series.

After being kidnapped off the streets of Atlanta a year ago and enduring unspeakable abuse during her time in captivity, Morgan is accidentally rescued when the Mountain Mercenaries are dispatched to the Dominican Republic to find a missing child. Thus begins a perilous journey from victim to survivor and the only person she trusts, the only one with whom she feels safe, is one of her rescuers, Arrow. For his part, Arrow feels an immediate affinity for Morgan and is determined to protect her, help her discover who had her kidnapped, and be there for her every step of the way as she figures out what comes next.

It's always a tenuous line one walks when creating a romance for a rape survivor and, in this case, one who had also been held in captivity for an entire year. Stoker's depiction of Morgan's struggles is thoughtful and sensitive. Her strength and resilience are incredible but she suffered an incalculable emotional trauma and dealing with that is harrowing. I have such incredible respect for this character and was in her corner every step of the way. And Arrow, her alpha hero who treats Morgan with such care, patience, and support is one of my all-time favorites. We should all be so fortunate as to have an Arrow in our corner.

The mystery portion of this story is also well-crafted, with plenty of twists and turns along the way. Just when I thought I had it figured out, Stoker would throw in another red herring and send me off in a different direction.

If you enjoy alpha heroes who find their purpose protecting women and children in peril and the strong women to whom they give their hearts, check out Susan Stoker's Mountain Mercenaries. There is a lot of character cross-over among the books in the series but each novel can be read as a standalone.

Note: While this story deals with the aftermath and recovery from prolonged captivity and rape, those events occur before the book opens and do not play out on the page.