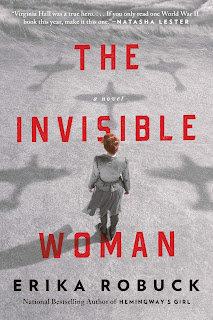 In the depths of war, she would defy the odds to help liberate a nation…a gripping historical novel based on the remarkable true story of World War II heroine Virginia Hall, from the bestselling author of Hemingway’s Girl France, March 1944. Virginia Hall wasn't like the other young society women back home in Baltimore—she never wanted the debutante ball or silk gloves. Instead, she traded a safe life for adventure in Europe, and when her beloved second home is thrust into the dark days of war, she leaps in headfirst.Once she's recruited as an Allied spy, subverting the Nazis becomes her calling. But even the most cunning agent can be bested, and in wartime trusting the wrong person can prove fatal. Virginia is haunted every day by the betrayal that ravaged her first operation, and will do everything in her power to avenge the brave people she lost.While her future is anything but certain, this time more than ever Virginia knows that failure is not an option. Especially when she discovers what—and whom—she's truly protecting.
PJ's Thoughts:
This is one of the best WWII novels I've read. Most of the book is written in third person, present tense which, I admit, took some getting used to. Once I caught the rhythm of the writing though, the author's use of it made sense. Placing the reader in the present amplified each character's situation, creating a compelling sense of urgency and life-or-death danger. It raised the stakes for the characters, and for me, the reader. I became absorbed into their world, their motivations, their hope and despair.
The characters are another reason why this book resonated so deeply with me. Rather than focusing primarily on the events of the war (though some are integral to the story and the author's historical research is impeccable), Robuck shines her spotlight on the people. We read a lot about military heroes in many WWII books but most of the secondary characters in this book are untrained, ordinary villagers - husbands, wives, children - from the young (a 10-year-old honored for his bravery with France's Croix de Guerre) to veterans of the Great War in their sunset years to brave pacifists willing to risk their lives, and their families, for the most vulnerable among us. These are the often unheralded heroes of France's battle against the evil of the Nazi regime. Knowing many of the characters in Robuck's book are based on real people who were a part of Virginia Hall's network makes their stories that much more compelling.
Of course, there's also Virginia's beloved France, a character in itself within this book. Robuck's descriptions bring to life the serenity of a beautiful sunrise over Notre Dame and the uplifting hope to be found in a profusion of flowers on an apartment balcony. But she doesn't ignore the darkness, especially evident in the devastation throughout the formerly bucolic French countryside. The pictures she paints with her words are vivid depictions that unrolled through my mind like a movie, some heart-wrenching, some hopeful, but always eliciting deep emotion.
And then there's Virginia. What an incredibly courageous woman. A legend in intelligence circles, she's not well known to the general public. I hope this book changes that for she deserves to be appreciated and celebrated for her efforts during WWII and beyond. I am in awe of her and all she accomplished, especially after a devastating injury that would have put most people out of the game forever. Robuck brought her to life not only as a master intelligence agent but as a fully-formed woman with hopes, fears, guilt, anger, and grief, capable not only of great bravery on her own but of inspiring it in others as well. She is a true hero.
Be sure to read the author's Afterword at the end of the book for more information on her research and updates on Virginia and the other main characters featured in The Invisible Woman.
Posted by pjpuppymom at 12:30 AM