Review - - When a Rogue Meets His Match 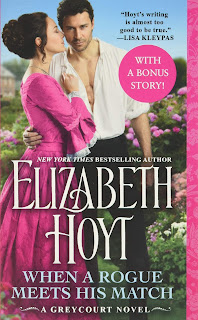 Ambitious, sly, and lethally intelligent, Gideon Hawthorne has spent his life clawing his way up from the gutter. For the last ten years, he's acted as the Duke of Windemere's fixer, performing the duke's dirty work without question. Now Gideon's ready to quit the duke's service and work solely for himself. But Windermere tempts Gideon with an irresistible offer: one last task for Messalina Greycourt's hand in marriage.

Witty, vivacious Messalina Greycourt has her pick of suitors, so when her uncle demands Messalina marry Mr. Hawthorne, she is appalled. But Gideon offers her a devil's bargain of his own: protection and freedom in exchange for a true marriage. Messalina feigns agreement and plots to escape their deal. Only the more time she spends with Gideon, the more her fierce, loyal husband arouses her affections. But will Gideon's final deed for Windemere destroy the love growing between them?

Elizabeth Hoyt is always a must-read author for me, her stories filled with dark, redemption-seeking heroes and bold, clever heroines--and sex hot enough to make a girl blush and dog-ear the pages for referencing later. She kicked off a new series, the Greycourt series, with Not the Duke’s Darling (December 2018), which I thoroughly enjoyed and which introduced some subplots (notably the Wise Women group) that I was excited to see carried through the series. This book took a bit longer to come out (set for a December 2019 release, but arriving in December 2020). I was so excited to read this book! My expectations were unbearably high.

For these reasons, or possibly others, I did not enjoy reading this story as much as I have other stories from Hoyt’s Maiden Lane series, or even the Soldiers series. I couldn’t pinpoint why--because her writing is the same, very readable and fast paced, sensuous, but the characters themselves, something seemed to be lacking for me. I couldn’t quite buy into the characters or that they were in love with each other. When we meet Hawthorne, he is already in love with Messalina. He is the “fixer” for her uncle and as such, he’s low-born and unsavory in reputation, which are usually aspects Hoyt manages quite successfully in winning us over to, but he was already in love with her so he felt a little stagnant in his character arc. The heroine, for her part, hates his guts--so here we have enemies to lovers in a marriage of convenience. And her character arc--her hating to loving him--feels a bit rushed.


There are some great scenes where more is revealed about Hawthorne, things that slowly win over Messalina’s prejudice to him. But overall, even with the plots and subplots and action, the story felt a little thin. And because the story and characters felt thin for me, the Happily Ever After--or are these two truly destined for each other?--also felt a little thin. Also, there wasn’t enough about the Wise Women group in this story...I really liked them from the previous book. What I did like were these scenes in the story: anytime we saw the little boy Sam and the puppy Daisy; how Hawthorne is able to outwit his employer and get the money owed him; and Messalina’s sister, Lucretia and her love of cakes. (I hope Lucretia’s husband knows to bring her cake to win her over.) Overall, it wasn’t a bad story...it just wasn’t good either, if you know what I mean.
Posted by pjpuppymom at 12:30 AM