Review - - Lady Constantine and the Sins of Lord Kilgore 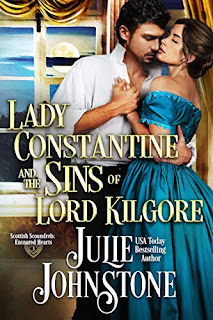 Callum, the Marquess of Kilgore, long ago accepted that he was no saint. So when he’s offered a shameful bet—to seduce the lady some have dubbed the “Ice Queen” and recover the land he foolishly gambled away—he agrees. Yet, as he comes to know Lady Constantine, he realizes this kind and pure woman deserves far better than a reprobate like himself. Now, he would do anything to protect her from the scandal he helped create, even ruthlessly pushing her away. It seems he hasn’t fallen quite as far into sin as he thought…But a brush with death and an unexpected offer of a marriage of convenience from Constantine provides an opportunity he never anticipated: recoup his squandered fortune and win back the woman he loves. But before Callum can launch his new plan, a heinous plot rips him away, snatching his freedom and destroying any trace of the man who wanted to open his heart.Constantine hasn’t a clue what to do when the man she loved, hated, and mourned returns from the dead. Though she is still legally his wife, she certainly doesn’t know him anymore—if she ever did. The seemingly unrepentant rogue appears focused solely on revenge, no matter the destruction it may cause—a far cry from the complex man of honor she once believed him to be. Yet, despite the pain of the past and the demons of the present, Callum still holds the power to inexorably fill her with a yearning and a hope she can hardly control. Suddenly, Constantine wants to risk her heart again for the one thing she has always longed for from the only man she ever cared for—exquisite, unconquerable love.
PJ's Thoughts:
Julie Johnstone is an auto-buy author for me. Her books are always filled with period authenticity, heart-stopping action, deep emotion, and beautifully crafted, multi-layered characters. This book is no exception. Constantine and Cal are fully-formed, complex characters with a twisted journey to love that would challenge the strongest of individuals. The depth of anguish, anger, guilt, and betrayal that these two endure plays out across scenes that are heartrending and sometimes difficult to read, especially in the first chapters. True to form, Johnstone challenges them, and their feelings for one another, as they slowly evolve and their relationship deepens, but not without a fair number of obstacles. Their triumphant conclusion is hard won indeed but all the more sweet for the path they are forced to travel to get there.
I have been eagerly awaiting this couple's story and it's exceptionally good so you're probably wondering why I gave it four stars instead of five. It's because of a plot device used that hindered my overall enjoyment of the book. The story begins one year in the past then in Chapter Two jumps forward to the characters' present day. I was immediately plunged into the story and its sense of urgency from the first pages and by the end of Chapter Two was fully invested in Cal and Constantine, their predicament, and the secondary characters who accompanied Cal home. But then, in Chapter Three, the story flashed to six years in the past, where it stayed until Chapter Five which brought us back to the present. That back and forth continued for almost 60% of the book. It's an effective way to tell the couple's complete story from first introduction but it didn't work for me. Each time I became immersed in the present-day story again I'd be pulled back to the past and every time that happened my connection to the characters would lessen. By the time the story finally stayed in the present, I had disconnected from them to the point where I was reading about them rather than experiencing their journey with them. It still created a very good reading experience but not the all-immersive one that would have earned my 5-star rating.
~~~~~~~~
Have you read Julie Johnstone?
Do you enjoy flashbacks in your books?
One person who posts a comment before 11:00 PM, February 26 will receive an e-book copy of Lady Constantine and the Sins of Lord Kilgore.
*Must be 18
Posted by pjpuppymom at 12:30 AM