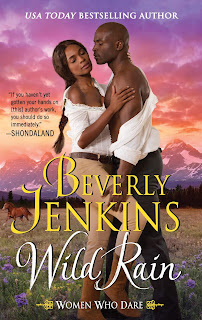 Banished by her grandfather at the age of eighteen, Spring Lee has survived scandal to claim her own little slice of Paradise, Wyoming. She’s proud of working her ranch alone and unwilling to share it with a stranger—especially one like Garrett McCray, who makes her second-guess her resolve to avoid men.
Garrett escaped slavery years ago and is now a reporter in Washington. He’s traveled west to interview Dr. Colton Lee for an article, yet it’s Lee’s fearless sister, Spring, who captures his interest. Clad in denim and buckskins instead of dresses, she’s the most fascinating woman he’s ever met. And he’s certain she also feels the connection that sizzles between them.
But when a shadow from Spring’s past returns, all is on the line: her ranch, her safety—and this wild, fierce love.
PJ's Thoughts:
Wild Rain is another historical western romance from Beverly Jenkins that immersed me in the story from the get-go and kept me eagerly turning pages until the end.
Spring Rain Lee is such a complex, compelling woman and I absolutely adored her. Growing up in Wyoming Territory, she was taught all the feminine skills of women of the time but following her mother's death, and her grandfather's betrayal, she was forced to confront the difficult lessons no woman, let alone an eighteen-year-old girl, should ever have to experience. It changed her, hardened her, and cemented the vow that she would never need a man in her life. This tough rancher can do it all on her own, and as good as any man, thank you very much. Which is why she's not prepared for her reactions to the polite, soft-spoken, Eastern gentleman who keeps doing things for her like opening doors, refusing to sit at the dinner table until she does, cooking her breakfast while she's out doing morning ranch chores, and, shockingly, is more concerned for her pleasure than his own. She doesn't need any of that. But what if she discovers that she wants it?
Garrett McCray is such a fascinating hero, a total fish out of water when he arrives in Wyoming on horseback during a blizzard for which he is not prepared. I admit, I'm usually partial to alphas but I fell for this "cinnamon roll" hard. He may be gentle, and kind, and harbor a love for the written word, but there's fire inside him too. He's a nurturer and a protector, but also a defender. He's a former slave, now an educated man, a lawyer, but with an artist's soul. He's a man who knows his way around a woman's body but travels the path only with her consent. He's not perfect, but he's perfect for Spring...if he can fully accept her for who she is, love her unconditionally...and keep her alive long enough to reveal his heart.
Jenkins brings these characters, and the majesty of Wyoming, to life in this heart-tugging, compelling story that was hard to put down. Her descriptions of the rugged landscape and starkly beautiful mountains are like vivid paintings where words are the brush strokes and it all comes to life in your mind's eye.
Jenkins' characters offer insight into the lives of people of color in the years following the Civil War and the variances in treatment, acceptance, and tolerance experienced in different parts of the country. I love how she seamlessly slips historical tidbits into her stories. They never feel like lessons but I always come away from her books learning something new about Black history in America. They add a richness to her characters, her own heritage, and the historical fabric of our country that are incalculable.
Many of the secondary characters in this book are multi-layered and fascinating in their own right while also offering insights into Spring and Garrett. Spring's godfather, Odell was my favorite grumpy teddy bear with a heart of gold while sister-in-law Regan was frequently the voice of reason who reminded Spring of her worth and the validity of her life choices without presuming to tell her what to do. The villains also were fully developed and chilling in their hatred, creating more than a few tension-filled, heart-in-my-throat moments.
I don't know if Jenkins has any plans to return to Paradise, Wyoming but there are secondary characters I'd sure love to see more of, especially Ed Prescott: Native American, engineer, successful businessman, and Spring's horse-training, business partner. What a fascinating man. I want to know more!
Fans of Tempest (Spring's brother's book where Spring is introduced) will enjoy catching up with Colton and Regan but readers new to Paradise can absolutely read Wild Rain as a standalone. I enthusiastically recommend both.
Have you read any Beverly Jenkins books? Do you have a favorite?
Do you enjoy Western romance?
What are your thoughts on Cinnamon Roll heroes?
One randomly chosen person who posts a comment before 11:00 PM, February 13 will received a signed, print copy of Tempest by Beverly Jenkins.
*Must be 18
*U.S. only
Posted by pjpuppymom at 12:30 AM