Review - - Sweet Rogue of Mine 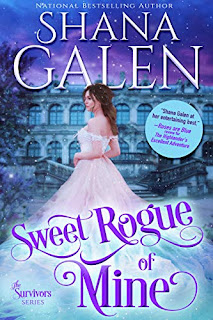 A sharpshooter who’s lost his sight…When a stray pistol ball from the battlefield took Nash’s sight, it also took his entire identity. He’s retreated to his father’s county home to lick his wounds, but his drinking and isolation have only made things worse. When Nash’s father, a powerful earl, threatens to send Nash to an asylum, his former brothers-in-arms call in one of their own to set Nash back on the right course. Nash fears he’s fallen too far and perhaps ending it all is the best solution. Until he encounters a woman in the garden signing a bawdy tune at the top of her lungs.An outcast who sees too much…Prudence Howard has traveled the world with her missionary parents. But after the scandal she caused in Cairo, they’ve foisted her on a vicar in the small town of Milcroft and sailed to the Far East to evangelize without her. Pru doesn’t mean to cause trouble; it’s just that being good is so very hard. When she meets Nash Pope, she’s instantly intrigued. He might be hot-tempered, but he’s handsome and unusual and arouses her interest and passion like no one she’s ever met. He might not know he needs or even wants her help, but Pru has a plan to save him.Together they glimpse a brighter future.Nash is bewildered by the unconventional woman who keeps turning up on his doorstep. She tries to teach him night writing, claims a feral peacock is a momentous sign, and makes his toes curl when she kisses him. She refuses to give up on him. But though Nash finds it easy to believe in Pru, can he ever trust himself again?
PJ's Thoughts:
Not only is Sweet Rogue of Mine my favorite book of this series, I also think it's one of the best books Shana Galen has written. Galen does not shy away from the deeply emotional trauma of Nash's depression and PTSD from his years in the war, the resulting injuries, and the haunting memories of what happened on the battlefields. His destructive behavior and thoughts of worthlessness are on full display when he's at his lowest. But then a ray of sunshine, singing bawdy songs, unexpectedly drops into his life and slowly, reluctantly, hopefully, Nash's life begins to change. I was intrigued by Nash when he first appeared on the pages of The Highlander's Excellent Adventure (book 8) and was hopeful that Galen would explore his story in a book of his own. I'm so glad she did. I ached for what he had been through and his continuing struggles, especially those connected with his father. I liked that Galen didn't minimize the challenges facing him, didn't offer easy fixes, and that she surrounded him with individuals who had his best interests at heart, like his friend and fellow survivor, Rowden Payne (hoping we'll see more of him in a future book). Then there's Nash's slowly deepening relationship with Pru. It was everything I could have wanted. It's been a while since I've been as deeply invested in a character as I was with Nash.
It could only have been Pru. Oh, how I adored this character. She brought the light to Nash's darkness, the hope to his despair. I loved everything about her, from her bawdy songs to her "oddness" to her staunch advocacy for what Nash needed and deserved in life. I also appreciated that Galen gave her depth and layers. She had an intriguing storyline of her own. I especially enjoyed her relationship with a local dowager and the strength and confidence she gained from it. It was so enjoyable watching her come into her own, using that confidence not only to help Nash but to fight for the happiness for which her heart yearned. Every time she came to Nash's defense, every idea she brought to fruition to help him find his best life and re-open his heart made me love her even more.
One of the aspects of this story that I most enjoyed was how Nash and Pru each saw themselves as opposed to how each viewed the other. Though Nash was the handsome and dashing son of an earl, his injury had changed his perception of himself to lesser than, whereas Pru had a pragmatically clear view of herself. As the daughter of a missionary, she had no social standing, and a glimpse into a mirror was all that was needed to confirm the opinion of many that she possessed no outer beauty in either body or face. None of those facts were discarded by Galen. Instead, she crafted a story wherein the characters were forced to look deeper, past outer facades, in Nash's case one he was unable to see, for inner strength and beauty not always noticeable at first glance. It's a critical part of the journey they must travel to discover not only the beauty and strength of the other but, more importantly, that residing within themselves.
If you enjoy character-driven, historical romance with deep emotion, well-placed humor, sensual chemistry, interesting historical details, and a hero and heroine who will capture your heart, look no further than Shana Galen's Sweet Rogue of Mine. It is the first book this year to land on my Best of 2021 watch list.
Although this book can be read as a standalone, for a more complete understanding of Nash, and the challenges he faces, I encourage you to first read book eight, The Highlander's Excellent Adventure.
Posted by pjpuppymom at 12:30 AM