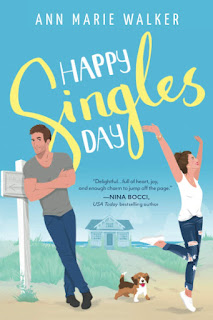 As a Certified Professional Organizer, everything in Paige Parker's world is as it should be. Perfect apartment, perfect office, perfect life. And now, the perfect vacation planned to honor Singles Day. After all, what's better than celebrating her pride in being single? Because who needs a man anyway? They have zero taste in quality television, leave the toilet seat up, and sleep with your best friend. No thanks. Her life is fine just the way it is.

As the owner of a now-dormant bed & breakfast, Lucas Croft's life is simple and quiet. It's only him and his five-year-old daughter, which is just the way he likes it. Because who needs a woman anyway? They nag you to clean up your stuff, want the toilet seat put down, and expect the dishes to be done the same day the meal is cooked. No thanks. His life is fine just the way it is.

But when Paige books a room that Lucas' well-intentioned sister listed without his knowledge, their two worlds collide. If they can survive the week together, they just might discover exactly what they've both been missing.

Calling Hallmark! This book needs to be made into a movie...now. It has everything I could ask for in a sweet, charming, funny, and emotionally heart-tugging story. I adored it.

Walker's characters are fully formed and true to life. She depicts them so clearly that I had no trouble visualizing them as real people. My heart ached for Lucas as he navigated (not that successfully) the murky waters of moving forward with his life following his wife's death. Paige, on the other hand, thinks she knows exactly where she's going but when she's finally forced to slow down it gradually becomes apparent that there are layers to her that need to be unpacked, considered, and brought back into the light. Watching these two do exactly that - together - made me so happy. Then there's Lucas's almost five year old daughter, who stole every single scene she was in. I loved the bond between father and daughter but it was the relationship she formed with Paige (who didn't think she even liked kids) that really grabbed my heart. Oh, and the puppies! Who could resist a litter of tiny puppies in danger? Certainly not Paige...and not me either. (Don't worry...no puppies were harmed in the writing of this book)

About two-thirds through the book, I still had no idea how Walker was going to bring these two individuals with very different lives together. She does so in a way that showcases compromise, respect, and love with an ending that I was 100% behind.

I don't know if Walker plans to return to Aurelia Island for any future stories (Lucas's sister, Sophie?) but if she does, I'll definitely be buying them.