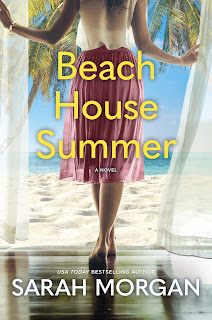 When Joanna Whitman's famous ex-husband dies in a car accident, she doesn't know what to feel. Their dysfunctional marriage held more painful secrets than she cares to remember. But when she discovers that the young woman with him in the crash is pregnant, Joanna feels compelled to act, knowing exactly how brutal the media spotlight will be on celebrity chef Cliff Whitman's ex-wife and his mysterious female friend.Ashley Blake can't believe it when Joanna shows up in her hospital room and suggests they hide away at her beach house on a sleepy stretch of California coast. Joanna should be hating her, not helping her. But alone and pregnant, Ashley can't turn down Joanna's offer. Yet she knows that if Joanna ever found out the real reason Ashley was in that car, their tentative bond would shatter instantly.Joanna's only goal for the summer is privacy, but her return causes major waves in the local community, especially for the man she left behind years ago. All Ashley wants is space to plan for her and her baby's future, and to avoid causing any trouble for Joanna. But as secrets spill out under the hot summer sun, this unlikely friendship is about to be put to the test.
PJ's Thoughts:
Necessary ingredients for a successful Saturday: warm sunshine, a comfy chair, a cold beverage, and a Sarah Morgan novel. I had all four today and it was glorious.
Morgan is a consummate storyteller, drawing me into her world effortlessly, piquing my interest with compelling plotlines, and creating intriguing, complex characters - with layers and experiences that beg to be explored - who invariably bring a plethora of this reader's emotions to the surface.
Beach House Summer has three main female characters at crossroads in their lives. There's Joanna, a 40-year-old woman with the unexpected opportunity for a do-over. She fled her small coastal hometown twenty years ago, never planning to return. But sometimes, the only way we can chart a new path for ourselves, both internally and externally, is by returning to the place and people we left behind.
Mel is one of the people who was left behind when Joanna fled all those years ago. She's never understood why Joanna abandoned their friendship but she's living with a faulty explanation of what actually happened that night twenty years earlier. Mel is facing a crossroads of her own in her relationship with her teenage daughter who is close to the age Mel was when her friendship with Joanna ended. She refuses to walk away from the chance to finally understand why Joanna, a girl who was more sister than friend, didn't consider Mel important enough to stay in touch. But maybe she needs to examine a few things about herself too.
Ashley, the youngest of the three, is the wild card in the mix, with more than a few surprises - and unexpected twists - in her journey. Considering her situation, one would expect her to be the recipient of wise counsel from the two older women. One would be wrong.
I loved how Morgan threaded the paths of these three women together, intertwining past and present relationships in guiding them forward. There's so much growth along the way for all three, as well as acceptance, forgiveness, and genuine affection. I so enjoyed getting to know them. And I thoroughly enjoyed the other citizens of Morgan's small California town. I loved how they rallied around one another. This is a town I not only want to visit; I'd love to live there!
Beach House Summer is women's fiction - the focus is definitely on the women - though there are romantic threads for all three of the featured characters as well, featuring a long-term, happy marriage, a best-friends-to-lovers relationship, and a second chance for Joanna and the childhood sweetheart who broke her heart all those years earlier...but just might be instrumental in creating a new opportunity for happy hearts moving forward.
Add this one to your summer reading list. I highly recommend it.
Posted by pjpuppymom at 6:00 AM