Review - - A Duke for Diana 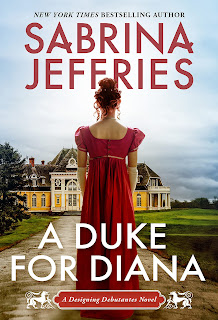 Self-made civil engineer Geoffrey Brookhouse has unexpectedly inherited the dukedom of Grenwood. But he has a secret that could ruin his family. Hoping to save his timid sister from that fate, he seeks to marry her off to a respectable, protective gentleman. With the London Season imminent, Geoffrey hires Elegant Occasions to orchestrate her debut. Yet Lady Diana Harper, spirited fashion expert, proves more than he bargained for. Suddenly, Geoffrey’s sister is emerging from her shell, and he is beleaguered with social invitations and gossip! Worse, Diana is attempting to transform him into a presentable duke—when all he really wants is to make her his own . . . Diana doesn’t know what to make of the handsome, disheveled duke. The man bristles at the very idea that his fashion faux pas might spoil his sister’s chances. Yet Geoffrey’s stubbornness simply inspires Diana to ruffle his feathers—by setting him on a course of self-improvement. Although there’s something endearing, even irresistible about his flaws, can a man who hates the ton tolerate a woman who makes her living catering to them? Little does either know that they have more in common than they suspect—and that two can create a society all their own . . .
PJ's Thoughts:
This book was an absolute delight, one of my favorites by Jeffries in quite some time. While I enjoyed her last series, the tone in A Duke for Diana is different. Lighter. More effervescent, if you will. First of all, I loved the sisterly dynamic among Diana, Eliza, and Verity. While each is uniquely original (I enjoyed getting to know them a bit in this book), they're tightly bonded by their family circumstances and how they've worked together to overcome them. I genuinely liked all three of them and am excited to cheer them on in the next two books.
I love a fish out of water and that is definitely Geoffrey at the start of his story. It was fun to watch him evolve with Diana's guidance without losing the essence of the humble, pragmatic, hard-working man he's always been and to watch Diana, a woman certain of herself in business, blossom romantically in the process. These two together were so much fun to watch. I enjoyed their banter, the sizzle, and the deep feelings that gradually, almost reluctantly at times, continued to grow between them. I liked that Jeffries made them a team in the face of Geoffrey's troubles and that Diana was instrumental in helping him solve them (but not doing it for him). It gives me confidence in a couple's longevity when I see them working together to solve a problem.
The secondary cast in this book is richly depicted, with Geoffrey's sister, Rosy taking the lead but also including their mother, Diana's butler, and others. All lend humor, conflict, and emotion to the story without detracting from our hero and heroine. I'm hoping we'll see at least some of them in the next two books as well.
A Duke for Diana is a promising start to what looks to be a fun new series from Sabrina Jeffries. I recommend adding it to your summer reading list.
Content Note: Mention of suicide and depression
Posted by pjpuppymom at 6:00 AM