Review - - Tear Down the Throne

Tear Down the Throne
by Jennifer Estep
The Gargoyle Queen - Book 2
Publisher: Harper Voyager
Release Date: May 3, 2022
Reviewed by Nancy 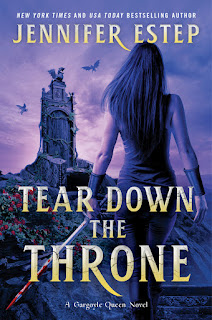 Crown princess. Clever spy. Powerful mind magier. Gemma Ripley of Andvari is all those things—and determined to stop an enemy from using magical tearstone weapons to conquer her kingdom.

Gemma’s quest for answers leads her to a trade Summit between the various kingdoms. Among the other royals in attendance is Queen Maeven Morricone of Morta and her son, Prince Leonidas—Gemma’s charming and dangerous nemesis.

Gemma knows that Maeven always has a long game in motion, and sure enough, the cunning queen invokes an arcane tradition that threatens the fragile truce between Andvari and the other kingdoms. Despite her best intentions, Gemma once again finds herself thrown together with Leo and battling her growing feelings for the enemy prince.

When a series of deadly attacks shatters the Summit’s peaceful negotiations, Gemma realizes that someone wants to tear the royals down from their thrones—and that this enemy just might succeed.

Jennifer Estep continues her Gargoyle Queen saga with Tear Down the Throne, which picks up Princess (and spy) Gemma Ripley’s story soon after the prior volume, Capture the Crown, ends. Gemma has returned home to Andvari after surviving torture by Crown Prince Milo of rival kingdom Morta and narrowly escaping. When the story opens, she’s visiting an important nobleman to maintain a good relationship.

Her host makes a tactless remark that reminds her of what she suffered in Morta. This leads to a recap of the previous book’s events, including Gemma’s longstanding attraction to another Mortan prince, Leonidas. The recap posed a problem for me. While it presents the necessary information fairly succinctly, it occurs mid-conversation. By the time the recap, which runs almost two full pages, ended and Gemma replied to her host’s blunder, I had lost the original remark.

Other than that, the story moves at a solid pace with an interesting plot. We learn more about Gemma as she tries to figure out what the Mortans are doing. Prince Milo is using tearstone, which is found mainly in Andvari, to make arrows. His men are also stealing tearstone. Why? What does he intend to do with it? Having been tortured with one of those arrows in the prior book, Gemma has a personal interest in thwarting his plans.

She has help from Reiko Yamato, a friend who’s a spy from the allied kingdom of Ryusama. Estep lays the groundwork for bringing Reiko and her romantic interest to the fore in the future. She also develops the two women’s friendship, though Reiko’s split loyalties cause friction between them.

We also learn more about Gemma’s family, who are closeknit and supportive. There are nods to the prior trilogy, Crown of Shards.  The emotional center of the book, however, is Gemma’s relationship with Leonidas Morricone, Morta’s bastard prince. That relationship springs to the fore when his mother, Queen Maeven, invokes an ancient tradition to force Gemma to marry Leonidas. If he completes three trials known as the Gauntlet, she must either marry him or pay a forfeit that could involve Andvarian lands and money or Gemma’s death. If he fails to complete them, he forfeits his life. Gemma is appalled to find that neither prospect appeals to her though one part of her yearns for him to succeed.

Estep does an excellent job of exploring Gemma’s conflicted feelings and Leonidas’s determination. As Leonidas progresses in the trials, Gemma’s internal conflict deepens. A moment after the second trial forces her to confront her feelings and gives Leonidas hope.

While the Gauntlet tests are cleverly constructed, I found the final one, when Gemma can influence the outcome, confusing because  the tests had been presented as all or nothing in the beginning, with no mention about her playing any role. Had that been explained at first, I would have read along happily and never questioned it.

Leonidas’s murderous brother, Milo, his wily and ambitious fiancée, Corvina, and the treacherous Captain Wexel all return. Gemma, Leonidas, and Reiko try to uncover Milo’s plot. They make progress but discover all, as befits the second book of a trilogy. The plot takes interesting twists and turns with the threads of the romance woven through it.

The Andvarian gargoyles and the Mortan birds known as strixes also play roles in the story, and one special gargoyle makes an important choice. These sentient species and the specialties in the magic system give the series world a unique depth and flavor.

While I always favor reading a series in order, Tear Down the Throne can be read as a standalone.

The suspense plot uses the world and its magic well. The characters acquire additional depth, and the relationships—families, friends, and enemies—progress nicely. We also learn much more about Gemma’s deceased mother and the way her long-ago actions influence the story. Gemma and Leonidas are easy to root for, and their relationship takes an intriguing, satisfying turn at the book’s end that raises their stakes for the final book.