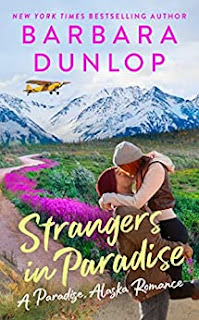 Hailey Barosse always knew what her wealthy family expected of her: marry an affluent Georgia man, run a charitable organization, and provide her parents with two or three grandchildren. But Hailey rebelled. Instead, she moved far away from that suffocating life, and for six years she’s built her independence by flying bush planes in the tiny town of Paradise, Alaska. Then a suave, handsome businessman arrives, shaking up her world and reminding her of her controlling family. Parker Hall wants to invest in her boss’s airline, but Hailey doesn’t trust him at all. He might be confident and charming, but she knows all about self-centered cutthroat industrialists—and Parker is one of them. Parker Hall prides himself on being a self-made entrepreneur. He earned his fortune by working day and night, expanding his gold mine and investing in new businesses that support his growing dream. His next opportunity is in Paradise, but his plans are quickly derailed by a fierce, beautiful pilot who both fights and fascinates him. The closer he gets to the feisty Hailey, the more she pushes him away. But Parker’s not giving up, not on Paradise and not on Hailey.  He’s come a long way in life by being laser-focused on his passions, and this time is no different…

I am thoroughly enjoying my visits to Barbara Dunlop's Paradise, Alaska and especially the group of friends at the small community's core. In this third book she pairs a bush pilot (Hailey) with a ruthless businessman (Parker) and the sparks fly. As with the first two books, Dunlop once again set the stage for an immersive experience in the rugged Alaskan wilderness. I don't know if she's ever been there but she sure excels at making me feel like I am while reading her books. The scene with the wolves was especially riveting.

I loved the push and pull between Hailey and Parker, adversaries from the start who can't seem to resist the pulse of attraction between them. Given her family background, I certainly understood Hailey's mistrust and, let's face it, Parker's action weren't doing much to allay her fears. Both characters ended up being more complex than I expected, especially Parker. I appreciated their growth - which came mostly in the latter portion of the book - and happily bought into their relationship at the end.

After three books, I'm fully invested in this small Alaska town and her residents. Looking forward to discovering who is next on Dunlop's Paradise center stage.