Desperately Seeking a Duchess
by Christi Caldwell
All the Duke's Sins - Book 2
Publisher: Berkley
Release Date: May 24, 2022
Reviewed by PJ 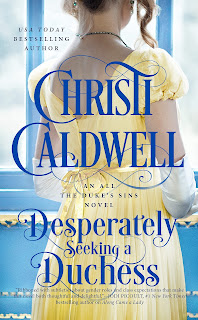 Cailin Audley doesn’t fit in with Polite Society. A life spent among the working class taught her to value her independence in a way no newfound fortune or glittering ballroom could ever erase. When a major misstep sees the new heiress whisked away to the English countryside, Cailin soon realizes the vexing lengths her family will go to see her settled.  But having risked her heart once before, Cailin has no interest in the men of the ton—especially not the frustratingly charming Duke of St. James.   Courtland Balfour, the Duke of St. James, devoted brother and notorious rogue, despises what he must become—a fortune hunter. But with the ducal coffers drained by his late, spendthrift of a father, Courtland knows his duty lies at the altar and he will do anything to ensure a future for his siblings. Just his luck that the one lady who could make this new fate bearable, who enflames him like no other, is the one woman who wants nothing to do with him or his title.   But when an act of desperation inadvertently lands he and Cailin at the heart of another scandal, Courtland knows better than to waste his chance. Surely he can convince Cailin to love him?

PJ's Thoughts:
This second book in Caldwell's All the Duke's Sins series is another page-turner that kept me entertained from beginning to end. Caldwell is so skilled at creating complex, fully-developed characters and that ability is once again on full display here, with both primary and secondary characters leaping from the pages.
Cailin and Courtland are intriguing, multi-layered characters with whom I felt an immediate affinity. I loved that they began as adversaries who then moved into friendship that gradually deepened into unexpected love. Caldwell has gifted them with snappy banter, a fair number of chuckles and a modicum of angst, along with some steamy attraction. She's also given them complex family relationships that threaten to derail their budding relationship at several turns along with outside obstacles looming over them like a stormy cloud. I enjoyed the evolution of both main characters, especially Courtland's as he comes to realize (with help) that working together is much more beneficial than trying to carry family burdens alone and Cailin's, as she learns she can embrace her true self and still find a place within her new family.
There's a solid secondary cast in the book with the potential for future stories among them. I know Cailin's remaining brothers are on deck but I'm already hoping that Courtland's youngest sister will be a future heroine of her own story. She's only 14 now but she's a firecracker and glimmers of the adult she will grow to be are already strong.
You can read Desperately Seeking a Duchess as a standalone but I think you'll have a deeper understanding of the Audley family dynamics as well as Cailin herself if you begin with Along Came a Lady. If you're interested in the Duke of Bentley's back story as well as his romance with Lady Lydia, check out the series prequel, It Had to Be the Duke.
Posted by pjpuppymom at 5:00 AM