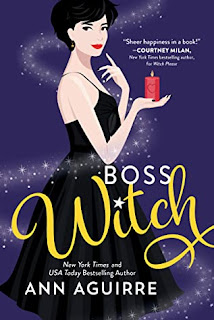 Clementine Waterhouse is a perfectly logical witch. She doesn't tumble headlong into love. Rather she weighs the pros and cons and decides if a relationship is worth pursuing. At least that's always been her modus operandi before. Clem prefers being the one in charge, always the first to walk away when the time is right. Attraction has never struck her like lightning.

Until the witch hunter comes to town.

Gavin Rhys hates being a witch hunter, but his family honor is on the line, and he needs to prove he's nothing like his grandfather, a traitor who let everyone down. But things in St. Claire aren't what they seem, and Gavin is distracted from the job immediately by a bewitching brunette with a sexy smile and haunting secrets in her eyes.

Can the bossiest witch in town find a happy ending with the last person she should ever love?

Ann Aguirre is well known for her science fiction and fantasy action-adventure series, which include strong romantic elements. In Boss Witch (and presumably in the rest of the Fix-It Witches series), the romance comes to the fore. Unlike Aguirre’s other series, these contemporary paranormal romances are set in a small Midwestern town of St. Claire with no journeys to other worlds or exotic locations.

The heroine of Boss Witch, Clementine (but please call her Clem!) Waterhouse, and her cousin operate an appliance repair shop known as Fix-It Witches. Since the public doesn’t know about magic and witches, they conceal their use of their magic, known as technomancy, in making the speedy repairs that are their hallmark. They also belong to a close-knit, all-female coven.

The story opens with the coven discussing the arrival in town of a man they believe to be a witch hunter, someone who finds witches by tracing their magic. The hunter reports them to enforcers, who then sever their magic and turn them in to mundane humans—incidentally seizing some of their property as “compensation.”  Clem’s cousin, Danica, has had magical spikes in the local bakery because of her attraction to the baker, and these spikes have drawn the hunter to their town.

Clem resolves to distract the hunter from his quest. At the same time, she and the other local witches take steps to conceal their magic via wearing charms, raising wards, and drinking suppressive potions. They hope the hunter will be unable to locate any witches, lose interest, and move on. Matters don’t develop quite that way, of course.

The hunter, Englishman Gavin Rhys, doesn’t enjoy being a witch hunter. He persists in the job because he longs for his father’s approval and because, having been raised in this order of witch hunters and enforcers, he knows no other life. But his dissatisfaction is growing.

He and Clem meet in a bar, where she pretends to have been stood up, and lures him into protecting her from other patrons. Once they’ve met, she uses that as a springboard to a flirtation they both believe to be temporary.

Under pressure from his father and unable to locate the witch who caused the magic spikes that had him sent here, Gavin rents an apartment and plans to stay for a month. His attraction to Clem is also an incentive, but he plans to use his time to question other residents about any odd events that might point him toward his quarry.

As Gavin meets the townspeople, their warmth and friendliness draw him. They also give Aguirre a chance to showcase one of the upsides of small-town life, the close relationships of residents who’ve known each other a long time. Her characters are likeable and varied in personality and age. Similarly, Clem’s coven members include a range of ages and sexual orientations. Clem is bisexual though that’s mentioned only in passing.

Clem is her family’s fixer, and tensions in her family generate a lot of stress for her. Danica, her cousin and partner in the fix-it shop, is so distracted by her budding romance that she isn’t carrying her share of the workload. This apparently isn’t unusual, but Clem is reaching her limit with it. Their grandmother has stepped up her meddling, trying to force a rapprochement between Clem’s mother and her ex, Clem’s dad, who’s famous for his philandering. The dad also wants to renew ties, though Clem is fed up with him.

The family tensions swirling around Clem and the issues Gavin has with his father are developed well and present Clem and Gavin sympathetically. Even Danica isn’t purely annoying. She and Clem have layers in their relationship that prevent her from being a one-note character.

One of my favorite scenes in the book occurs at the finale of the Lugnasadh festival, where witches from all around the region gather to celebrate. At the end, they join their magic in a rainbow whirlwind of energy. This big display of magic has a downside, though, and it propels the book toward its conclusion.

The magic system is simple, not requiring explanation that would draw attention from the main plot. Technomancers are especially adept with gadgets, vivimancers with living creatures, and neuromancers with illusions.

The relationship develops with unusual, creative dates Clem and Gavin devise and with a lot of humor. The downside for me is that they’re in lust with each other from their first meeting and sprinkle innuendo through their conversation. I tend to prefer a slower build and fewer lust references in the beginning. I realize that isn’t the case for everyone, of course, so I didn’t let my preference affect my rating.

My one quibble with the book, which did affect my rating, is the spell the coven works near the end of the book. It has an important effect, so I was left wondering why they don’t just do that immediately.

That one issue aside, Boss Witch is well written with sympathetic, layered characters and an intriguing setting. The loves scenes are explicit, tender and emotional.