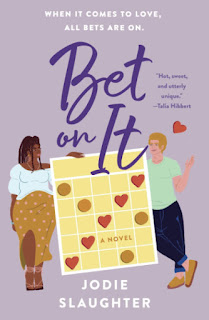 The first time Aja Owens encounters the man of her dreams, she’s having a panic attack in the frozen foods section of the Piggly Wiggly. The second time, he’s being introduced to her as her favorite bingo buddy’s semi-estranged grandson. From there, all it takes is one game for her to realize that he’s definitely going to be a problem. And if there’s anything she already has a surplus of, it’s problems.In Walker Abbott’s mind, there are only two worthwhile things in Greenbelt, South Carolina. The peach cobbler at his old favorite diner and his ailing grandmother. Dragging himself back after more than a decade away, he’s counting down the days until Gram heals and he can get back to his real life. Far away from the trauma inside of those city limits. Just when he thinks his plan is solid, enter Aja to shake everything up.A hastily made bingo-based sex pact is supposed to keep this…thing between them from getting out of hand. Especially when submitting to their feelings means disrupting their carefully balanced lives. But emotions are just like bingo callers—they refuse to be ignored.Jodie Slaughter's Bet on It is a heart-stoppingly fun, emotional romance that will have readers falling in love until long after the last page is turned.
Santa Says:

Bet on It by Jodie Slaughter was a smash, five-star hit for me from the moment we meet Aja Owens in the frozen foods aisle. It just so happens that Walker Abbott meets her at the same time. Although they are strangers, Walker reaches out to Aja while she is having a panic attack there. Not quite a cute meet but when they meet again at, of all things, a Bingo night the attraction is instant. Aja is a beautiful women who grapples with anxiety.

Walker returns to his hometown to help his grandmother, a Bingo enthusiast, who is recovering from a fall. His grandmother is the only reason he would ever set foot in that town again. Well, that and what turns out to be the best peach cobbler in the world featured at the local diner.

That is until he meets Aja at Bingo night where Aja and his grandmother are regulars.  Aja, who teaches him the fine art of Bingo. The game of Bingo brings them together and they become closer but the winner gets so much more. The heat level is scorching in this book but not the only element that keeps them together. Walker and Aja help one another through their traumas and anxieties. Aja around her panic attacks and people and Walker around his parents’ drug issues and abandonment.

Ms. Slaughter really takes you on an emotional journey but their love, Bingo and peach cobbler make their story ever sweeter.