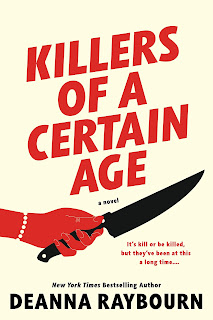 They’ve spent their lives as the deadliest assassins in a clandestine international organization, but now that they're sixty years old, four women friends can’t just retire – it’s kill or be killed in this action-packed thriller by New York Times bestselling and Edgar Award-nominated author Deanna Raybourn.

Billie, Mary Alice, Helen, and Natalie have worked for the Museum, an elite network of assassins, for forty years. Now their talents are considered old-school and no one appreciates what they have to offer in an age that relies more on technology than people skills.

When the foursome is sent on an all-expenses paid vacation to mark their retirement, they are targeted by one of their own. Only the Board, the top-level members of the Museum, can order the termination of field agents, and the women realize they’ve been marked for death.

Now to get out alive they have to turn against their own organization, relying on experience and each other to get the job done, knowing that working together is the secret to their survival. They’re about to teach the Board what it really means to be a woman—and a killer—of a certain age.

Part Charlie’s Angels (movie version), part RED, this book delivers the action and antics one would expect of a story where the main characters are the underestimated underdogs. (In one of the descriptors of this book, it was pitched as The Golden Girls meets James Bond–which is also apt, but for me, when I heard the premise, I was immediately, “Oh, it’s RED but all women! I’m in!” The Charlie’s Angels bit came a bit later when I was immersed in the world of the four women, mainly Billie’s POV, who reminds me of Drew Barrymore’s character in the Charlie’s Angels movies, and the hilarious shenanigans the Angels did to accomplish their goals.) Normally I would offer more details of the story itself (sometimes the blurb doesn’t really do the actual story justice) but in this case, the blurb is exactly what is happening: these very dangerous women aren’t being allowed to have the quiet retirement they have earned. The organization where they’ve worked for 40 years has issued a termination order for them, and it takes all their cunning to stay ahead of the kill shots and take out the organization instead.

If you ever were curious how to make a death look natural, you will definitely get an idea how to do so; as well as some truth how even the best thought out plan can go awry when the bad guy has a gun and a twitchy trigger finger. Also the very real need for a personal trainer to keep one in the physical shape needed to crawl around in the catacombs of France or outmaneuver the assassin who is trying to kill you. I love the fact that no matter how old these women are, they are the same women as they were when they were 20, which I think in our culture (maybe in all cultures), we forget and treat women of a certain age as well, not people. It’s a smack on the nose of the patriarchy that just because a woman isn’t “young”, she isn’t sexy or smart or relevant any longer, that she doesn’t deserve to be a heroine (main attraction) just because she’s over the age of 40. So yes, it’s some good feminist fiction.

My only beef with the story is the writing style for the “flashbacks.” The current scenes, first person POV of Billie, are smooth and well-paced, easy to follow, and the dialogue and banter are hysterical. However, the flashbacks almost always drew me out of the story and made it a bit too easy to set the book aside to go do something else, which is a problem when you’re reading something that needs a review by a particular date. It wasn’t that the flashbacks weren’t necessary; when I did get into them, the content was relevant and also well-paced, but it was written in third-person present-tense omniscient, which meant for me it had two pet peeves of mine: head-hopping (thus no deep point-of-view) and flashbacks (things that already occurred) told in present tense. It made me crackers. However, not everyone is as precious about the type of tense used in story writing, so this might not bother most readers. There are a ton of YA novels that others rave about that I won’t touch because it’s in present tense. I’m just sharing my opinion about this in case anyone wonders, “Why only 4 ½ stars? Are you only somewhat feminist, Hellie?” No, no, I’m wholeheartedly feminist; I’m anti-present tense is all.

That said: I think if you like a good romp with your girlfriends, if you think of your girlfriends as “ride or die” friends, this is a book to celebrate those relationships. Also, I am wondering if we might see these women again. I feel like the ending is left open to the possibility of another book, and I want to remind everyone that RED 2 was even funnier than the first RED.