Review - - The Duke Not Taken 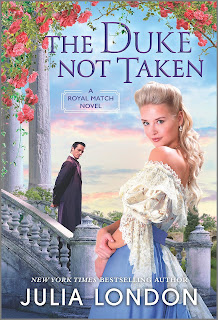 Impossible. Infuriating. Intoxicating.Ever since her sister became queen two years ago, Amelia Ivanosen, Princess of Wesloria, has been flirting and skirting scandal—just barely. Before she does anything too outlandish, she is sent to England and Lila Alexander, illustrious matchmaker to the ton, is recruited. Respectably ensconced at the country estate of a family friend, Amelia is introduced to many eligible bachelors, but…there is no spark. There never seems to be unless the man is completely wrong for her.Next door lives Joshua Parker, Duke of Marley, who is grumpy and reclusive—for good reason. His first wife died in childbirth. When Marley is dragged by a friend to his neighbor’s soiree, he and Amelia instantly dislike each other. Their banter is snarky and heated. He’s a stuck-up smarty-pants; she’s a self-involved, annoying princess.Sparks fly when they’re together—fireworks actually—but they loathe each other. Really. So why can’t they stop thinking about each other?
PJ's Thoughts:
After meeting Amelia (heroine's younger sister) in Last Duke Standing, I was quite curious about what London planned to do with her when the time came for her own story. In her sister's book, Amelia comes across as spoiled and self-centered, but still staunchly supportive of her sister, the future queen. In other words, a complex character, my favorite kind. In The Duke Not Taken, we finally discover exactly what makes Amelia tick, what it is she has been longing for all these years, and the journey is an absolute delight. I've already read the book twice. In fact, it's ended up being one of my all-time favorites written by Julia London.
In London's capable hands, the characters in this book (even the four-legged ones) practically leap from the pages. They are all wonderfully developed, including secondary characters, though it's Amelia and Joshua who take the lead. The friction between these two could start a forest fire (though actual romantic scenes are very mild). Their banter is lively, witty, and non-stop but when we finally reach the point where it takes a deeper turn, London gives them the opportunity to reveal their hearts, their fears, and their dreams in a sweet, poignant way that they've not done with anyone else. Their slowly evolving romance is endearing, snarky, humorous in parts, heart-tugging in others, and had me cheering them on throughout.
The secondary cast shines without taking the spotlight from our opinionated princess (who just wants to be like everyone else) and grumpy duke (who just wants to be left alone). The young girls are hilarious and help reveal hidden facets of Amelia's personality while driving Joshua around the bend with their loud and off-key singing...until the youngest among them starts knocking down the walls around his heart. Miles, Lord Clarendon, is the kind of best friend every brokenhearted duke deserves. Lila, the matchmaker is at her wit's end trying to match a princess who seems set on taking the most difficult path to love possible. And Donovan, who has appeared in both book one of this series and in the A Royal Wedding series, just may be my favorite Julia London character ever. If you've yet to meet Donovan, picture Mary Poppins as a drop-dead gorgeous, gay man beloved by parents and children alike, and you have Donovan. Wherever he goes, laughter, joy, and well-planned organization follow. There's a garden scene in this book involving Donovan that could easily be missed if you blink, but its poignant simplicity is enormous for its emotional depth. My thanks to the author for including it. It filled my heart with joy and brought me to tears.
And then there are the letters. I adore an epistolary romance. So much is revealed, even - maybe especially - when the letter writers don't realize to whom they're writing. The letters between "a concerned resident of Devonshire" (actually Joshua) and the "Master of the Iddesleigh School for Girls" (actually written by Amelia) are humorous, thought-provoking, and such a delightful way of offering insight into these two characters as well as (unknowingly) deepening the relationship between the two.
Finally, London wraps things up with an epilogue (I do love epilogues) that had the happy tears flowing. This book made me laugh, snort, sigh, and, yes, cry. It's going to my keeper shelf. I have a feeling it's destined to become one of those comfort reads I turn to when I need a feel-good story to soothe my soul.
Posted by pjpuppymom at 7:00 AM