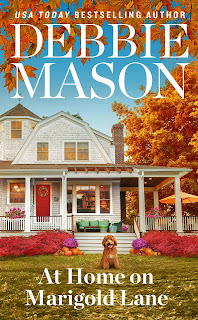 True love deserves a second chance.For family and marriage therapist Brianna MacLeod, moving back home to Highland Falls after a disastrous divorce feels downright embarrassing. Bri blames herself for missing the red flags in her relationship and worries she’s no longer qualified to do the job she loves. But helping others is second nature to Bri, and she soon finds herself counseling her roommate and her neighbor’s daughter. Bri just wasn’t expecting them to reunite her with her first love . . .Caleb Scott knows his failed marriage has been tough on his stepdaughter, so he’s grateful she’s found someone to confide in . . . even if it’s Bri MacLeod. Seeing Bri brings up feelings he’d thought were long buried. He knows it’s not the right time for either of them to be rekindling a relationship, but being with Bri feels right—like coming home. He’ll just have to convince her that risking her heart again might give them exactly what they both need . . . a second chance.
PJ's Thoughts:
I've been reading Debbie Mason for a long time, since her debut back in 2010 when she was writing historical time travel - with a touch of fairy magic - as Debbie Mazzuca. I followed her into small town contemporary romance (as Mason) and have never been disappointed. Her complex, well-developed characters, emotional storylines, perfectly-placed humor, and complicated family dynamics never fail to take me on an emotional ride, depositing me at the end of the book with a satisfying, well-earned, happy ending.
In At Home on Marigold Lane, Mason continues the story of Brianna MacLeod that began in book four, The Inn on Mirror Lake. While this new book stands well on its own, for a complete understanding of what Brianna has suffered, as well as the tumultuous relationships within her family, I recommend reading the two books in order.
I never know where Debbie Mason is going to take me when I begin one of her books and in this one she took me places I did not expect. She's a master at developing an array of characters and then weaving them in and out of the story in a way that progresses the main story line as well as each individual's path, and those paths aren't always easy ones to travel. She's also very good at creating flawed, multi-layered characters who justifiably earn my anger with their actions. But then she starts unpeeling their layers, revealing emotional scars, fears, and reasons. She takes them a journey of learning and introspection and by the end of the story, I've found myself in their corner. Such is the case with a few very important secondary characters in this book who play parts in keeping Cal and Bri apart but, ultimately, become their biggest supporters.
Mason isn't hesitant to tackle the tough subjects and there are more than a few in this book. They are balanced with humor, sweet romance, healing, and hope but they are never glossed over. Cal and Bri must both confront issues standing in the way of their happiness together but that makes their HEA all the more enjoyable in the end. I really loved these two together. I'm all about second chances and they sure deserved theirs. Mason continues the second-chances theme in this book with more than the central romance. There are second-chance friendships, second-chance family relationships, second chances to build a rewarding career, and, hopefully, more second chances to come. There are some secondary characters in this book who are in need of a happy ending. I'm hoping we'll see more of them in future books.
Have you read Debbie Mason yet?
Do you enjoy romances with a community of characters?
One randomly chosen person who posts a comment before 11:00 PM, September 29 will receive a print copy of At Home on Marigold Lane.
*U.S. only
*Must be 18
*Void where prohibited
Posted by pjpuppymom at 4:00 AM